It is always a pleasure to watch films the deal with the LGBT community with realism, taste, and without oversexualizing things and Filipino Isabel Sandoval (a transgender herself) has managed just that with “Lingua Franca”, a film that goes much further than just dealing with the particular issues.

Lingua Franca is screening at the Slovak Queer Film Festival

The story revolves around Olivia, an undocumented Filipino transwoman who works as a caretaker of Olga, an elderly Russian woman, in Brooklyn. In her effort to become a permanent citizen and also to provide for her mother back in Cebu, Philippines, she has been trying to get married to an American man, an effort that actually costs her a lot of money and take time. The deal eventually falls through, but about that time, Olivia meets and becomes romantically involved with Alex, Olga’s grandson, who has just been hired at the slaughterhouse of his uncle. Their relationship progresses, but things take a more difficult turn when Alex realizes that Olivia is transsexual.

Isabel Sandoval directs a film that manages to make its points through a subtle but eloquent approach. The issues foreigners face in order to get a green card is the one that functions as its base, but the story also deals with how people perceive transsexuals and the difficulty of taking care of the elderly, particularly when they are suffering from mental issues. I was also impressed by the way the film deals with the conflict of identity theme, since, this time, it is not the transgender individual who has doubts, but the heterosexual, who is not sure of how to deal with his feelings. The fact that when he eventually decides, he becomes this conservative, futile romantic man is almost humorous, if not for the dramatic unfolding of the story.

Lastly, I particularly enjoyed that the feelings and the psychological status of the protagonists are communicated mostly through their silences and their body stances, which Banks also captures excellently. Isabel Sandoval is great in this approach, but I found  Eamon Farren’s performance a bit excessive at times, although not to a point to fault the overall quality of the movie significantly.

Not much more to say, “Lingua Franca” is not a good LGBT film; it is a good film. Period. 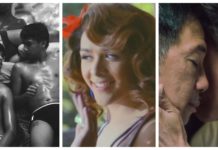 Interview with Auraeus Solito: “I celebrated the worlds I have lived in and I am living in.”

Interview with Isabel Sandoval: I want to shake up preconceived notions of what being different, and specifically trans is

Film Review: Remington and the Curse of the Zombadings (2011) By Jade Castro

Interview with Samantha Lee: I wanted kids to feel like they could get into this profession and be proud of their identities at the...