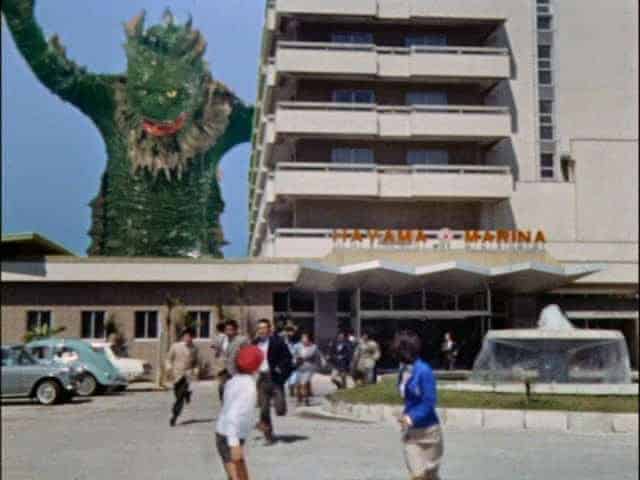 When a special rocket accidentally loses its cargo, the Science Patrol is sent to investigate when a nuclear weapon goes missing and finds it attached to a giant sea creature rampaging near a seaside resort forcing them into action to stop it.

The story here is pretty much like the last episode, which had a wholly simple structure. The idea of the bomb getting lost takes the place of the usual MacGuffin used to bring about the monsters’ appearance, and once it’s out, the Science Patrol have to find a way to stop it, only with the advent of the worry over the bomb exploding adding a little extra suspense to the proceedings. Ragon is featured and discovered rather early on and focuses on Fuji and Hoshino trying to get away from it as it terrorizes their vacation spot before Ultraman arrives to finish off the creature and save the day. It’s a simple, straightforward storyline that provides plenty of monster action and not much else.

While nowhere near as inventive as the quality of the special effects in the episode before, this still has a lot to like in this regard. Instead of utilizing a lot of miniatures and fancy monsters as in that episode, here we get a shockingly large amount of composite work. This has plenty of fine optical work showing Ragon interacting and terrorizing the residents at the resort where we get several impressive shots of it appearing in the shot with the other residents to get an idea that it’s at the location all throughout the middle of the episode. That continues into the finale where the creature chases Fuji, Hoshino and their friends into the forest surrounding the resort, where we see more composite shots of the two groups walking through the same places. This carries on the theme of effects experimentation throughout the series, making for a nice connection to the series so far.

Aside from that fine optical work, there isn’t much else to this one. The Ragon costume is much the same as the creature’s first appearance on Ultra Q, being a low-rent Creature from the Black Lagoon rip-off of an amphibious marine reptile with a gill-man face and a bunch of slime. The costume looks quite enjoyable and competent for what it is, even though it looks like a re-purposed wet-suit with the goofy face attached, and is a fine made-for-TV monster which is a decent fulfillment at this point. There isn’t much else here, as the miniatures are confined mainly to the ship Ragon sinks early on and then the main setting in the forest where they battle it out in the finale.

There’s not much to be said at all about the acting here. Ito gets more screen time as a comedic relief character with his being forced to perform secretarial duties at Science Patrol HQ against his wishes as he wants to be in on the action, but proves his worth when he suggests something that just might work to stop Ragon with a play on the old music-soothes-the-savage-beast idiom. Fuji and Hoshino continue to display the type of relationship that made them be re-written into brother-and-sister in the U.S. dubbing. Beyond these minor pieces, we don’t get much on the crew here.

The main aspect that should really win out is the main brawl between Ultraman and Ragon, is a slight letdown which really could’ve been something. Having the extra suspense element of trying not to set off the nuclear bomb on the creature during the fight, the ability of Ultraman to get it safe during the fight keeps this from being a typical fight, but beyond that, nothing much happens. It’s mostly just rolling around with a few chops and tumbles thrown into the mix, and then comes the utterly hilarious screwup at the end where the explosion for the Specium Ray is set off and there’s a delay before it reacts in the opposite direction and must then hurl itself quickly the other way, resulting in a silly and cheesy looking ending to a serious episode. Before then, it had gone rather quickly and kept a fine pace, but a rather slight yet obvious flaw turns out to be detrimental enough to slightly lower this one.

There are some rather good elements within this one, but it’s still undone by the rather bland feeling that overcomes the whole episode. Give this a chance for all the watchable parts of this one, but it’s nowhere near the first episodes to be used when looking for an introduction to the series.