Supermodel Liliko has become one of Japan’s most recognizable faces, her face plastered over Tokyo in print and on television. To the general public, the star seems to have it all and is unstoppable as a super talent. However, there is a dark secret behind the model’s success, in the form of countless plastic surgeries, making her beauty entirely constructed. In order to deal with the pain of constant surgeries to upkeep her image, Liliko begins a drug fueled, downward spiral that puts her career at risk. The central focus of Liliko’s outbursts is aimed at her assistant Hana, whom along with her boyfriend, become tools for the model to vent her frustrations and fears. 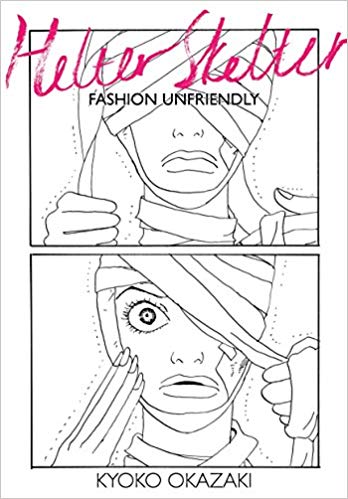 Kyoko Okazaki is known for her rather simplistic art style, largely through her work as a fashion illustrator and this style gives some contradictory impressions of the quality of the manga. To it’s detriment, many of the characters look similar, requiring to understand the context of the scene to identify the characters. However, the simplistic approach mostly works in favor of the manga in a few noticeable regards. Firstly, the style does reflect the fashion industry of the time, with long exaggerated frames, clean lines and clothes that emphasize sex, with Liliko acting as an embodiment of the ‘heroin chic’ image popularized in the 90’s. Secondly, the straightforward approach to visuals helps punctuate certain lines of dialogue. A prime example comes from the opening page that has a brilliant summary of Liliko’s fate with the line “A word before we start: laughter and screams sound very much alike”. This passage is accompanied by a simplistic, almost incomplete visages of the model, which forces the reader to focus on the words and the message hidden within the minimalist art approach.

Overall, the manga contains many segments where the clean imagery adds more weight to the words of dialogue, removing the focus from high fashion concepts into a narrative story telling. This minimalist approach seems conscious on the author’s part, as Kyoko Okazaki’s work with color showcases an artist with immense talent.

The story of Liliko’s struggles is structured to be rather engrossing from the get go, as it early presents this image of unattainable beauty, with just a hint of some dark secret. We quickly learn that only a few parts of the model’s body are her own, her eyes and her genitalia, everything other part was manufactured towards success. However, with youth fading and fashion trends constantly changing, the reader becomes aware that the combination of insecurity, hatred and entitlement, is about to boil over into something cataclysmic. Adversely, we get to see Liliko’s decline from the perspective of the public through her assistant and her boyfriend. The two become consumed by Liliko and begin to indulge in sexually deviant behavior for the model’s amusement. This fascination with sex and beauty becomes a valuable tool for Liliko to control the couple who see her as untouchable, which allows her to ask them to carry out violent acts against people she sees as rivals. Getting the story of Liliko’s decline from two different perspectives really helps illuminate on a larger scale the problematic environment which ends up consuming the young model.

Unfortunately, The story does take a bit of a decline near the end, although this is largely due to a real life tragedy in author Kyoko Okazaki being hit by a drunk driver. To clarify, the downfall of Liliko is fascinating in seeing the physical and mental decline as she can no longer afford the upkeep on her image. However, where the story does falter, is ending with the idea that there was to be a follow up to Liliko’s story, which gave the impression of an even darker tale. This was tragically shelved due to its creator being forced to live the rest of her life in recovery from an accident. Unfortunately, this ending does seem rather tragic, given the strength of the mangaka’s message and unique form of storytelling, which saw “Helter Skelter” pick up two awards in 2004 (Japan Media Arts Award, Osamu Tezuka Cultural Award).

“Helter Skelter” becomes a timeless cautionary tale of how the requirements to attain ‘beauty’ can come with high stakes to those who can’t navigate the immense pressures attached. The way Okazaki approaches such subjects as drug abuse, manipulation and depravity within the industry is a rather harrowing experience that feels grounded in a reality of someone who has perceived the worst aspects of the fashion world she worked within. Given our views on beauty, and push towards manufacturing it by any means necessary, “Helter Skelter: Fashion Unfriendly” feels like it will remain relevant for decades to come. A must read for fans of Manga geared towards a more mature audience.