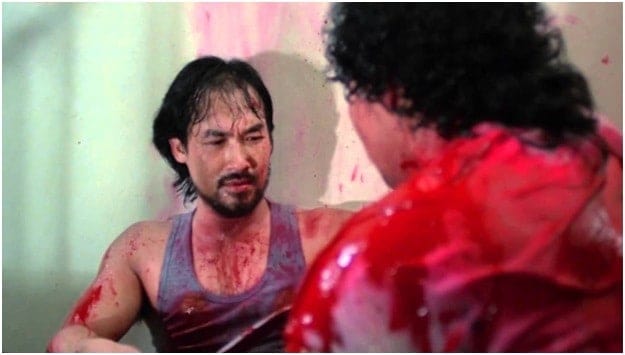 If you were to consult several lists on the internet and some film books on which Hong Kong action movies are the best, you would be presented with the usual suspects: John Woo films,  Bruce Lee films, “Fist of Legend” (1994), Jackie Chan Films and a combination of old (“Tiger Cage” (1988) and new (“Ip Man” (2008) Donnie Yen films. This is due to the fact that these films, more or less, contributed to the engraving in the collective consciousness of the world of the special brand of action of Hong Kong: fearless, innovative, bone-crushing, and above all, executed with technical competence. It is a shame then that this twilight-era-made Shaw Brothers film (they would soon turn to TV ventures in 1987) is not often mentioned in those aforementioned lists, since all those adjectives describe this overlooked classic.

The premise is your basic Hong Kong gangster “Heroic Bloodshed” copy-paste story: a gangster hero (played by Shaw Bros. stalwart Leung Kar-yan) who wants to retire, is suddenly thrust into the midst of a very personal gang war, when his former boss (played by “Enter the Dragon” Shih Kien) is brutally murdered. The culprit is no other than the slimy Rotten Chi (Shum Wai), who betrayed their boss in order to help the ruthless territory grabbing mob boss (Wong Chun). Helping him to accomplish his quest for vengeance are his friends: the fittingly-named Playboy Lung (played by “Duel to the Death”’s Norman Chu) and gangster-turned police officer Sergeant Lam (Richard Cheung). This would lead to a nihilistic and bloody ending.

Lung Wei-wang is a man who can be considered a luminary in the field of Hong Kong Cinema. Throughout his illustrious career, he has been an actor, director, and action choreographer of many Hong Kong action films. He has been a very familiar face for many Hong Kong aficionados, appearing as the villain in many films, distinguished by his patented goatee. But what many people fail to mention or even consider is his cinematic legacy as the director of very brutal, grim, and pessimistic urban crime dramas. With films like the Category III masterpiece “Escape from Brothel” (1992) as well as the Andy Lau starring “Bloody Brotherhood” (1988), Lung has been providing HK cinema the gut punch that separates it from other cinemas for a decade or two.

In his films, there is the abundance of violence and men trying to survive in a world that is chock-full of it. Lung reinforces that theme throughout the entire running time of this movie. From the first scene to the last, there is the extra emphasis on killing and hostile takeovers, with nobody spared. Although his later movies would undoubtedly be more grim in context, this one more than makes up for it by the amount of sheer carnage on display. The handling of the characters is played to its logical conclusion: harm my boss and my blood brothers and I/We will bring upon you a machete/chopper filled hell like no other. In bringing that conclusion to the screen, Lung gives us the standard Hong Kong hyperbolic drama, infused with sequences of unimaginably creative and bloody violence.

The acting in this movie supports this recurring Hong Kong theme well. We have the standard Triad Knight in Leung Kar-yan’s character Mad Wei, who will fight anybody who tries to harm his boss and blood brothers to the death. This is a typical HK gangster role (soon to be made more famous all over the world by the role of Chow Yun-fat in “A Better Tomorrow” (1986)), but it is played well and that is enough. We also have Norman Chu’s Playboy Lung who is introduced hilariously in the beginning. This is not the first time that Chu has played these playboy roles, as he was also a similar Lothario in the earlier Shaw Bros gross-out fest “Seeding of a Ghost” (1983), so this would have been a walk in the park for him in terms of acting. The rest of the cast plays their tailor made roles as well, with Rotten Chi slimily played by Shum Wai (who has played similar roles throughout his career that every time you see him, you immediately know that he is either the bad guy, or the stool pigeon or the devil’s advocate) as well as director Lung, who plays (surprise) an evil triad with a goatee.