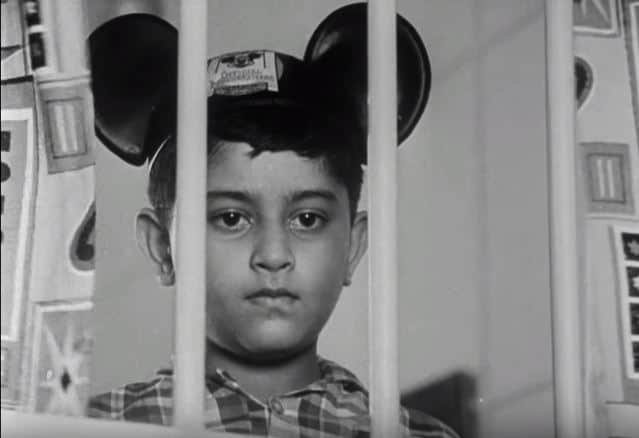 In a classic storytelling fashion, this black and white short film by Satyajit Ray beautifully examines two kids from two different social backgrounds engaged in a kind of one-upmanship. Without using any dialogues, this film subtly portrays the impact of class distinction on children even at a very tender age. Released in the year 1964, it is often considered as a prelude to the much acclaimed film, “Goopy Gyne Bagha Byne” (1969), and is perhaps also a tribute to the director’s favourite genre of silent movies.

The story is simple and the competition that brews up between the two children is almost playful, except that it’s not what it appears to be at face value. The seemingly childish rivalry actually brings to our notice the larger picture in the context. It could be a study of how ideas of consumerism and capitalism start affecting the lifestyles of common people, irrespective of their economic backgrounds, thus destroying the innocence of children. In spite of having no want of toys or shortage of options for entertainment, the rich kid feels left out and lonely.

When he encounters the street kid playing happily with his meagre assortment of objects such as a plain bamboo flute or a small drum, he feels conflicted. He has grown up to equate happiness in terms of materialistic possessions, but faced with such a strange situation, for a second, he seems confused. He reacts by engaging in an aggressive display of his possessions to prove how he is better off than the other kid. But the street child returns with a kite, symbolising freedom, the one thing that the rich kid lacks thereof. The realisation angers the rich kid and he retaliates by shooting down the kite.

However, ultimately the victory belongs to the street child, as the sound of his indomitable spirit rings out loud and clear through his flute from across the fields, drifting into the room through the window. The music lilts and remains the only form of communication throughout this film. The camera slowly moves from the face of the rich kid to the bars of the window, reminding us of prison cells, and then shifts outside to focus on the vast open sky, the realm of freedom, where the other kid belongs. The poignant melody of the flute continues in the background, while the rich kid sits down pensively, alone in the room with his back now turned towards the window, trapped in his own palace.

What is interesting to note is that it is the core tendency of capitalism to influence us to become easily bored of our possessions and to keep wanting new sources of entertainment and comfort. It is this mentality which leads to unpleasant feelings of greed and jealousy between people. This film helps us realise how we cannot be truly happy if we depend on material wealth for our happiness instead of learning to be content with what we have. This wordless experience leaves us equally speechless, as if enchanted by a spell. It is so simple and yet endearing in the way it portrays the little joys of life and the key to real happiness.

The 10 Best Movies of Satyajit Ray