“Ian, a young man with a fractured family history, travels from Australia to England to America in the hope of realizing his dreams and reuniting with his beloved sister. His story unfolds backwards through the framing narrative of Jim, a reporter driven to capture Ian’s experiences in a novel: not simple.” (Viz Media) 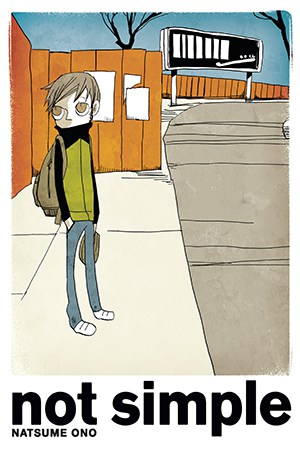 Staring the story with the death of the protagonist has become a bit of a contrived plot device, ever since it was initially used in the film “Sunset Boulevard”. However, “Not Simple” manages to transcend the pseudo complexity of a narrative work that tackles structuring in the reverse of a death. The manga accomplishes this by turning the tragic event into a kind of mercy killing, in a similar vein to Horace Macoy’s pessimistic masterpiece “They Shoot Horses, Don’t They?”. Ultimately, “Not Simple” is a portrait of a young child who had everything taken away from him, and is walking towards an inevitable early death.

The story of Ian is one wrought with tragedy and rejection from all those around him. In spite of this, he maintains a friendly demeanor which leads him to meet a reporter (Jim), who begins to take an interest in his life. Through Jim, Ian is able to slowly open up about his past, and while he downplays the profound harshness of his upbringing, Jim finds himself fascinated by the young man, and wanting to write a novel about his life. The novel quickly establishes that Ian is a strong-willed and determined individual, who, through conditioning within childhood isolation, is able to travel and find the strength to find his sister. For the bulk of the manga, the troubled youths story is certainly tragic, though not to the degree the opening sequence leading to his death would imply. However, within the last few pages, the only thing that Ian was holding onto comes crashing down i such a horrific fashion. The ending of “Not Simple” certainly hits hard, and is bound to leave an impression on the reader.

The visual style of mangaka Natsume Ono is rather unorthodox, with lines that are not clean, and more circular than traditional manga. Her approach to drawing seems to coincide more with American indie comics than it does with the traditional Japanese style. This art form does work well within a manga that is more focused on emotional narrative, also feeling reflective of the fragile nature of it’s subjects. However, the visuals are not overly impressive, and rather forgettable. Given that the focus and lasting impressions will rest within the narrative, this is something that should be overlooked when tackling the novel.

“Not Simple” is one of the best literary tragedies I have read, making it a strong recommendation for those who enjoy the genre, although, looking at the work as a manga it certainly has its shortcomings, particularly in the illustrations. I could not help thinking how much profundity a refined visual style would bring to the end product. The simplicity and subject matter is bound to make for a limited audience within manga fans, but I feel it would be more properly geared toward the American indie comic scene, that is more willing to embrace minimalist visuals in favor of strong narratives. Unfortunately, it is a bit hard to pin down the audience that would appreciate this work on the same level as I did (reflective of tastes), but is certainly worthy of more attention and discussion.