With the fifth and, as the title says, final episode in the “Battles Without Honor and Humanity” series, there was a major chance in the production. Whereas the former episodes had been scripted by Kazuo Kasahara based on the articles about the yakuza by writer Koichi Iboshi, Koji Takada took over the project. In an interview feature titled “Last Days of the Boss”, which can be found on the release of the film by Arrow Video, Takada reflects on how he convinced Fukasaku and the producers of his vision for the fifth film, which would not only continue the story of Shozo Hirono played by Bunta Sugawara, but which would also change the dynamics within the series, making it a legitimate sequel as well as a refreshing deviation from the formula of the series. 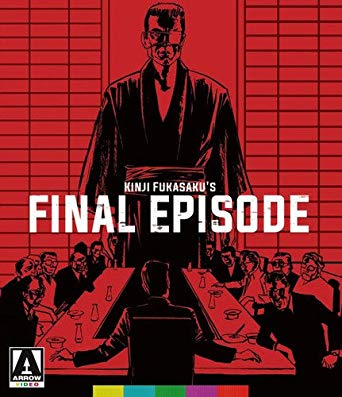 After the events of the previous film, “Police Tactics”, Hirono (Sugawara) serves a seven-year-sentence in prison while major changes in Japan’s political and social landscape force the criminal underworld to alter their organization as well. Under the rule of Akira Takeda (Akira Kobayashi), the Tensei Coalition is formed, an organization which, while still maintaining some of their illegitimate businesses, upholds a legitimate surface to the public and the authorities. However, these changes are quickly challenged as a minor quarrel with Hirono’s men threatens to destroy this image to the outside world.

As the conflict escalates, resulting in the assassination of the most important adviser to the Coalition, there are also internal quarrels about the succession of Takeda, his power and influence. Meanwhile, Ichioka (Hiroki Matsukata), a sworn brother to Hirono, swears to destroy the Coalition, an organization he thinks is against everything the yakuza stands for, making alliances with disgruntled boss Otomo (Joe Shishido), who is in disagreement with Takeda’s decision as leader.

Little by little, the surface of the Coalition begins to crumble, showing the public the true colors of the men in charge and by the time Hirono walks out of prison, his clan is deeply involved in an all-out war with the men of the Coalition.

Even though the general structure of the film does not seem to deviate much from the formula of the series on the surface, the subtle changes embedded within Koji Takada’s script add an interesting layer to the overall themes. The “code of honor”, as portrayed in the series has been unmasked repeatedly as a mere cover-up for the men in charge to expand their influence, to gain more wealth and, naturally, to serve their ulterior motives for revenge. This concept was perhaps best shown in the “rivalry” between Hirono and Nobuo Kaneko’s Yoshio Yamamori, whose character as the head of the Yamamori family pointedly reveals the hidden cowardice, corruption and two-facedness of the yakuza.

Within “Final Episode”, the values of “chivalry and honor”, as Takeda introduces them to his men, serve as a continuation of the aforementioned practice. However, this time his plan to disguise the yakuza as a “legitimate” company with political interest defines the Janus-headedness of characters like Yamamori as a general principle, with men now hiding their true nature behind a civil disguise. Hiroki Matsukata’s Ichioka puts it quite directly when stating that “yakuza are yakuza and murderers are murderers”, and nothing, not even the most elaborate disguise, will ever change this.

Overall, Fuksaku’s direction in combination with Takada’s script define this “final episode”, especially in the last third, something of a return to the frantic pacing of the first entry into the series. Given the changed dynamics of the film in comparison to its predecessor, the introduction of new characters such as Ichioka and Otomo results in interesting conflicts and wonderful scenes; for example, when they discuss the notion of a new generation of yakuza slowly superseding the older generation, branding them useless or getting rid of them via shooting or other means. There is even a little dark humor here and there; for instance, when an assassination attempt goes horribly wrong with one of the young men shooting his foot with a speargun.

In conclusion, “Final Episode” is a worthy ending to the “Battle Without Honor and Humanity”-series. While introducing subtle changes, it also continues the themes, character and visuals of the former entries and also defines a return to the qualities of the first film. Perhaps the biggest issue with the film may just be how established characters have so little to, and how disappointing their conclusion is.