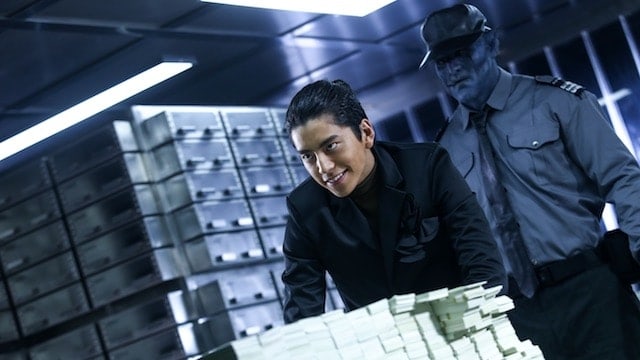 It rarely happens in the film world that a filmmaker has a debut and sophomore feature all in the same year and in span of a few months. Screenwriter by trade with some TV and one feature film credit under his belt, Zhang Chong debuted as a director with a fantastic, slightly operatic cautionary tale-type drama “Super Me” that world-premiered at Sitges before its distribution at home turf in China and the subsequent festival run, where we caught it at Paris International Fantastic Film Festival by the courtesy of Fortissimo Films. Zhang’s second feature, co-directed with Zhang Bo, “The Fourth Wall“, was awarded the Bronze Pyramid at Cairo, and will be the topic of some other review.

“Super Me”’s protagonist, Sang Yu, played by the young Taiwanese actor Wang Talu (also known as Darren Wang), seems like a perfect man for a modern day Chinese and global capitalism: highly motivated and able to work constantly under severe stress, but his lifestyle is beginning to take a toll on his mental health. He has not been sleeping for more than six months. As soon as closes his eyes, a masked demon comes to kill him in his dreams, so he wakes up in terror. He is at his wits’ end, having already lost his job, a place to sleep and a primary mean to earn his rent – his computer.

Then he realizes that he has a super-power to bring some objects from his dreams back to reality. Since they are all antiques and treasures, he becomes rich over night. And as he progresses as a proper Indiana Jones of the dreamworld, being more and more in control of his dreams, he gets richer and richer, more and more successful and famous. That draws the attention of some interested parties, like his former work partner San Ge (Cao Bingkun) and a relentless coffee-shop owner Hua Er (Song Jiu) who serves as his love interest from early on, but also a cohort of gangsters lead by the ruthless Qiang Ge (Wu Gang).

By its looks and mechanics, “Super Me” is a typical case of mainland Chinese repertoire movie aimed at wide audience. It is operatic in tone, powered by overly expressive acting on the verge of affectation especially by Wang and laced with plenty of cheap-looking, but still efficient CGI and with the emotion dictated by way too loud and overused music cues. However, it is nice to look at, thanks to the camerawork by Saba Mazloun and the set design by Giancarlo Derchie, easy to follow and overall an interesting watch for a period of time.

What it works against it are the dramaturgical laws, which is strange, knowing Zhang’s background as a screenwriter that he projects even to his protagonist. The trouble is that we, as the audience, know that there has to be some flip side to Sang’s overnight richness, but Zhang takes too much time to get to the point, insisting on repetitions with minimal gradation instead. Truth to be told, the montage sequences Zhang relies on are not repetitive themselves, but their point is pretty much the same. Also, the love story never kicks in properly, and the same goes for the meta-moment of Sang and San Ge being the film professionals.

Nonsensical ending with a number of plot twists thrown at the audience does not help either, since it is more or less a late attempt to add some layers to a simple story that should remain simple in its basic construction. The story needed more work on the details within it, action sequences could be longer (since it seems Zhang enjoys directing them), while the whole effort in making a point on a universal level seems a bit uncalled for. But even so, “Super Me” is not a complete waste of time.

Documentary Review: The Sound of Dali (2019) by Zhang Yang

Watch the Teaser Trailer for Upcoming Remake ‘A Better Tomorrow 2018’