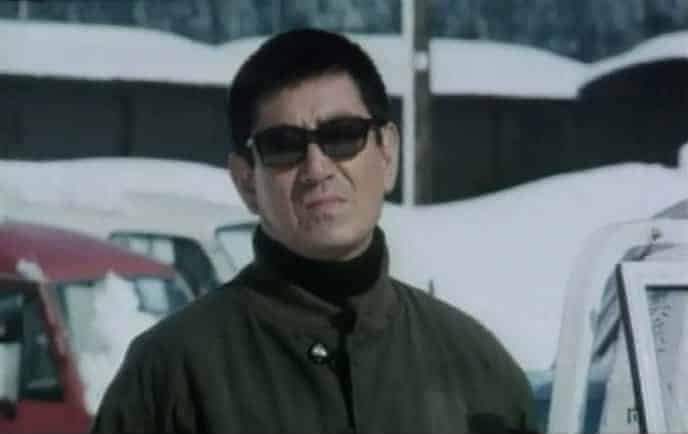 Yasha, a concept that comes from Hindu mythology, refers to benevolent nature spirits who take care of trees and the earth. In Buddhism, however, they were interpreted as evil, ghost-like spirits who preyed upon travelers, but later gave up their wicked ways upon hearing the sermons of the Buddha. The Buddhist version of yasha is very similar to another class of Hindu spirits: the ogrish, man-eating demons known as rasetsu. When Buddhism was brought into China, it mixed with Chinese folk religion and astrology, and yasha grew even further away from their Hindu origins. When Buddhism was brought to Japan from China, the Chinese interpretation of yasha was brought along with it. In Japan, yasha were often viewed as Buddhist manifestations of local evil spirits, like amanojaku and oni. Yasha took on some of the characteristics of these spirits, and sometimes even became synonymous with them (source: yokai.com)

In the case of Furuhata’s movie, it takes the form of a female demon on the back of the protagonist, a former yakuza, which allowed the director to give a number of different, contextual meanings to the concept. Let us take things from the beginning though.

Shuji is a retired yakuza from Osaka, who has moved to a small fishing village after an arranged marriage with a local woman, Fuyuko. As the story begins, Shuji has put the notoriously feared persona of the yakuza behind him, and is a happy family man with three kids, loved and respected by all the locals. Things, however, take a turn towards the worse when the beautiful bar hostess Keiko, also from Osaka, arrives in the town and takes over a local bar, which she names Hotaru (firefly). Her magnetism soon has most of the men in town becoming smitten with her, to their wives growing annoyance, but the real trouble comes in the face of her boyfriend, Yajima, who is soon revealed to be a yakuza with a rather cunning plan. He wants to make the locals hooked first on alcohol, then on gambling and lastly, on drugs.

Furthermore, he is quite violent, and a drug addict himself, and when Keiko decides not to help him anymore, after Shuji’s instigation, who realizes soon what he is up to, all hell breaks loose. Yajima takes a knife and attacks first Keiko and her little son, and then anyone who comes in his way. Shuji eventually manages to subdue him, but not before Yajima tears his shirt, revealing the Yasha demon in his back, and the secret of him being a yakuza. The revelation, along with Yajima’s actions soon starts having consequences for anyone involved, while Shuji and Keiko also come closer.

Yasuo Furuhata uses Shuji’s yakuza past as an “excuse” to present a number of social and philosophical comments about human nature. The most obvious one revolves around life in small, remote places, which is depicted as being quite hard, dominated by gossip and secretiveness at the same time, and with people that are good but naive, to the point that any cunning man can easily exploit them, as in the case of Yajima.

The central meaning, however, revolves around the concept of the demon and particularly who the real one is. In the beginning, and through a rather bloody intro, along with the tattoo on his back, the hypostasis of the demon seems to be placed in Shuji. Yajima’s cunningness and his drug-instigated fit gives him the trait, while soon after, Keiko is revealed to be the yasha, particularly for her role in the “seduction’ of the locals. On the other hand, Furuhata does not allow this demonization to stick to anybody, since all three protagonists seem to carry some drama that also makes them victims, highlighting the fact that their decision and actions are not strictly their own, but are also dictated by their past. In conjunction, the director also makes a comment about human nature and particularly the ability of people to change, with the ending giving a rather eloquent answer that seems to state that people have two choices in life: change or die.

In terms of aesthetics, Furuhata allows the film to unfold much like a noir, with the music and the slow pace, as dictated by the way of life in the snowy village, giving the rhythm in that regard. In order to avoid letting the movie become dull, he has placed a number of flashbacks, mostly associated with Shuji’s past, and a number of violent incidents that help in the entertainment of the production, and actually give it some mainstream values. Akira Suzuki’s editing works wonders in both flashback placement and overall pace. Daisaku Kimura’s cinematography is also excellent, with him portraying the realities of the village with realism and artistry, while the scene with the half-demolished building in Osaka will definitely linger on mind.

On the other hand, the connection Shuji and Keiko eventually share is not completely justified (despite their past) and a few minor arcs revolving around his son are not explored fully and seem somewhat misplaced in the whole narrative. Furthermore, I found the last part, which starts with Shuji’s trip to Osaka, somewhat unconvincing.

The acting is on a very high level. Ken Takakura gives a measured performance that emits dignity from every pore and is very convincing both as a violent yakuza and as a quiet family man. Ayumi Ishida is also great as both femme fatale and victim of circumstances. The one who steals the show, however, is Takeshi Kitano as Yajima, a character who emits both danger and stupidity from every movement, with his “chuckle”, which eventually became a trademark, being one of the apogees of his performance.

“Yasha/Demon” has some faults, but in general is a great movie that thrives equally on context, direction, editing, cinematography and acting