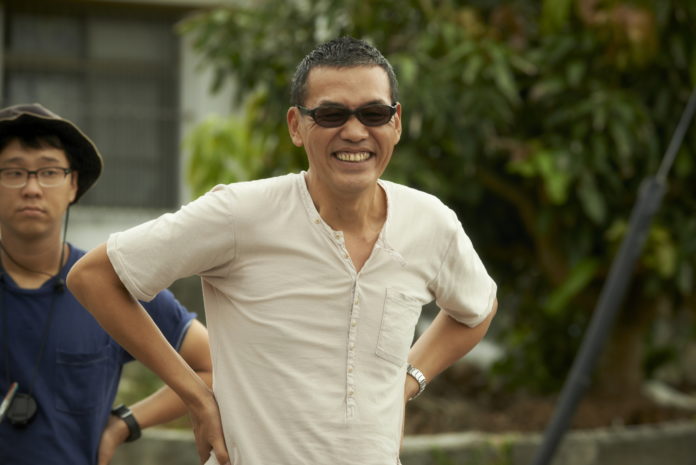 Hiroyuki Tanaka, better known under the pseudonym Sabu, was born in 1964 and originally wanted to become a musician before he eventually decided to pursue a career as an actor. Over the course of his career he has worked with director such as Takashi Miike and Ryuichi Hiroki. In 1996 he directed his first film “Dangan Runner” and has been a regular in international festivals like Berlin Film Festival or New York Asian Film Festival.

While his last film “Jam” awaits its cinematic release in Germany at the end of December, we sat down with the director to talk about the themes in his work, the characters in his films and the importance of running for his movies.

You said previously that the way your main actors looked was one of the main inspirations for the film. Can you elaborate on that?

Even though the main characters may have a different personality than you, the events that happen in the film should give you as the audience the opportunity to feel with the character. It is sometimes important when you make certain scenes that reveal the true colors of a character, despite of any outside factors or influence.

Many of your films, including “Jam“ deal with topics such as fate and the power of coincidence over our lives. What fascinates you about these topics?

I have been through moments which felt like pre-determined scenarios. Maybe this has something to do with the Buddhist concept of “Do-Seki-Tai-Men-Go-Hyaku-Shou“, which I believe in which can be translated to “500 lives”. I also think the creation of the earth has been a coincidence.

It could very well be that the person sitting in front of you in a cafe or that you run into on your way to the bus is someone you have shared one of the previous 500 lives with.

Since we are talking about these topics, would you consider yourself or your films as somewhat spiritual?

Definitely. There are many examples in my films, its visuals, or the concepts in them that come to my mind. The casting and the weather before we start shooting is another factor.

Is “Jam”, or at least certain parts of it, a satire on Japanese pop culture and the hysteria surrounding celebrities?

Doesn’t everyone know this moment when you listen to a song on the radio and you think it was written for you? You start to wonder how the speaker in the song knows you so well and how the song’s message fits so perfectly to your current situation. Artists aim to convey all of these aspects in their work and it does not matter whether you are a fan or not, because if you understand the message and can relate to it, then the song has indeed been written for you. These things happen all the time.

However, when “written for you” changes into “written only for you” the meaning starts to change and can result in an abnormal relationship which we can see in the character of Masato. First she competes with other fans for the attention of her idol (Hiroshi) and she starts to think her affection is more authentic compared to the others, resulting in the situation to escalate. In the end, only love is what is left between them.

I love the scene in which the character of Hiroshi is interviewed by his fans and Sho Aoyagi’s performance in that scene. Can you tell us something about the making of that scene?

Sho’s character was pretty much determined through the script. Nevertheless, while we we were shooting, we started improvising at times and had a lot of fun doing so which led to some of these scenes.

Can you tell us something about the making of the fight scenes in the film and how you approach these with your cast and crew?

In some way, a character like Tetsuo is immortal, which is why I wanted to shoot his scenes in a more realistic way. These scenes look chaotic but while we were shooting we had a fencing coach close by who offered guidance in the execution of them. I had a rough storyboard for these fight scenes but since we only a had a limited budget at our disposal, we usually had very little time to actually rehearse them.

One of the trademarks of your filmography is running, which I feel you have perfected as a cinematic “tool”. Can you tell me what is the fascination with running and share some details about the way you shoot these scenes?

The scenes involving running are perhaps the riskiest moments during shooting because we always want to avoid accidents. Most of the time, they turn out better than on the page, to transcendent moments for the actors even. To reach these moments, sometimes I let the actors run as long as possible with the camera still rolling.

It is always difficult to get permits to shoot on public streets or places which is why we shot most of these scenes in “Jam“ in a small shopping center. We shot them with a camera mounted to a bicycle which I think resulted in some very expressive images.

In what ways does “Jam” relate with your earlier works like “Monday” or “Dangan Runner”?

Well, during the last couple of years I tried to write more detailed than I used to. In the case of “Jam” I decided to just have fun and allow myself more freedom.

Can you tell us something about the music in your film and how it was created?

As I was writing the script, I had this melody in my head for the song by Hiroshi in the film. I thought how the character would have approached these songs, their lyrics and their titles. Finally, I recorded the song on my mobile and sent it to Mr. Matsumoto who is responsible for the music in “Jam”

In a previous interview you mentioned that you have already written a script for “Jam 2”. Can you give us more details?

Sadly, I cannot tell you more. But the film will definitely be very funny and suspenseful

Thanks for the interesting interview.

Interview with Sabu: “There is actually no improvisation in my films. What you see is written in the script. If the actors did that,...