The early 2000s mark not only the busiest period within director Johnnie To’s body of work, but also a phase during which he released some of this most interesting films, the majority of which collaborative efforts with Wai Ka-Fai. Even though it is difficult to choose one project as the best among the plethora of films To made in those years, his 2001 effort “Fulltime Killer” probably stands out as one of his boldest movies in terms of shaking up the genre formula as well as exploring the concept of the hitman in what may be an entertaining action film, but also one of the cleverest pieces of meta-fiction within Hong Kong cinema. 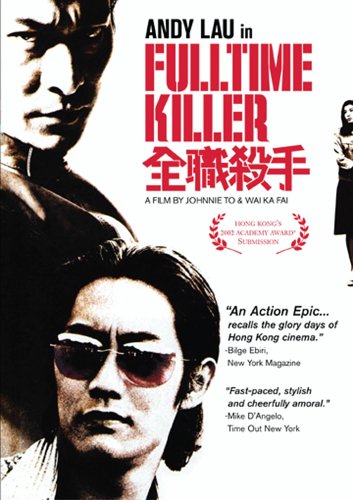 At the center of the movie we have the character of O (Takashi Sorimachi) and Lok Tok-Wah (Andy Lau), both of which make a living doing hits for the various Asian crime syndicates. Whereas O works discreetly and without causing too much public attention, cinephile Lok To-Wah craves an audience for his murderous dealings. Consequently, the majority of their clients prefer the way O handles their “businesses” which has begun to frustrate Lok quite a bit, so that he wants to prove he is the number one among the killers.

In order to provoke the shy O to agree to a duel, he beguiles Chin (Kelly Chin) who runs a video store and occasionally cleans O’s apartment. Even though O is secretly in love with Chin, he tries to ignore the connection between the two, until Lok interferes with his missions, making a confrontation between both men unavoidable. Meanwhile, Interpol agent Albert Lee (Simon Yam) has started a deep investigation into the murders of the two hitmen and is on the verge of arresting them, but he ends up getting in the crossfire between the two assassins.

Although Johnnie To’s films have always shown a certain awareness of their genre foundation, resulting in at times playful and very artful sequences and projects, “Fulltime Killer” seems to be quite different in that regard. O and Lok Tok-Wah are constructed as two archetypes of the assassin-figure as we know it from popular culture, with the one being the loner-figure while the other showing an almost devilish delight and showmanship when it comes to his work. Especially Andy Lau shines in his performance as a killer, inspired by various movie references he points out directly to others and even stages his murders in a way reminiscent of Hollywood action blockbusters. On the other hand, Takashi Sorimachi’s character often seems more similar to the killer-figure as common in European cinema or film noir.

Visually, the directors and DOP Siu-keung Cheng follow two different styles, also in terms of sound and music, highlighting the differences between the two main characters. Whereas O’s scenes are usually dark and gloomy, Lok’s scenes are mostly bright, highly stylized, often with the use of John Woo-like slow motion, and classical music as if he is conducting an orchestra of violence. Naturally, these two characters, considering their different design, have to clash at one point, a development further encouraged by their involvement with Kelly Chin’s character, resulting in a mixture of both visual approaches, thus celebrating the art of action cinema as a whole and making “Fulltime Killer” a love letter to the art of cinema.

In the end “Fulltime Killer” is an entertaining action film referring to many entries within the genre with great cinematography, action set pieces and two very good performances by Lau and Sorimachi. While it may not be the deepest film To has ever done, it is certainly the one that offers the most fun watching to its viewers.