Bullying has been a real and present danger in society and particularly in schooling life all over the world for a long, long time now. The advent of technological advances and the internet has brought this vice into the modern day, with the internet and social media often being tools to spread rumours about and malign someone truthfully or incorrectly. The speed with which such things spread and trend is often frightening. First-time director Arden Roz Condez combines several true stories –  stories that could even be coming true right now around you –  for his powerful debut film “John Denver Trending”. The film screened at Busan International Film Festival last year where it was nominated for Best Film- New Currents and won Best Film and Best Actor, among other awards, at the 2019 Cinemalaya.

John Denver Cabungcal is a Class 8 student who’s like every ordinary boy his age. He likes having fun in school with the few friends he has, participates in dance performances at school, does odd jobs around the village to earn a few pesos and helps his mum take care of his younger siblings when he can. One day, after dance practise at school, a classmate accuses him of stealing his iPad and runs away with John Denver’s bag. To retrieve his bag, John Denver follows him up to the rooftop and snatching his bag from the classmate, he proceeds to beat the boy and a fight ensues. Little does he know that this tiny incident of tomfoolery is about to make his life a living hell, for while the fight went on, another classmate managed to take a video of it and it was swiftly uploaded onto Facebook, an act which soon starts a chain of events that go from bad to worse for the young boy and his hard-working family.

The chief highlight of Condez’s script is how very real-world every situation, scenario and incidence that plays out feels. In this digital age ruled by social media, even the tiniest of actions, words or mistakes has the ability to come back and haunt you in ways you can never image, and the film manages to portray that accurately. The film places the setting of the story in the director’s own rural province of Antique, Philippines, but this is clearly a universal story and one that should resonate with every student, parent and teacher worldwide. The toxicity of altered, one-sided or downright fake news is aptly shown. The film also stresses on the importance of an open dialogue, not just between a parent and a child, but also between a student and teacher as well as one between a parent and an educational institution. Educational institutions do have steps to curb bullying and such incidences, but more often than not, there are frustratingly inadequate or inept, as John Denver ultimately finds out.

Where the film succeeds most is in putting the audience in the shoes of someone who is being bullied, both physically as well as over the internet and a large part of this success is down to its young lead actor Jansen Magpusao. The confused face of the little boy as he goes from one situation to another, dumbstruck and unable to comprehend the gravity of the situation, does not fail to garner sympathy from the audience. The embarrassment and fear he expels when his mother has to go to her son’s mid-school because she has been summoned by the Principal will feel too real to anybody who has gotten into a few spots of troubles of their own in their school days. The tension in the interrogation scene between him and the police officer is nearly suffocating.

Meryll Soriano as his hard-working mother, the one constant rock John Denver has on his side, is wonderful, her angst and frustration at the inadequacy of the school and law authorities in curbing the systemic bullying of her boy end up being extremely heart-breaking to watch. Her outburst in the Principal’s office, when she learns of her son’s previous misdemeanours, and her breakdown after the meeting with the Mayor and other members of the village council and parents stand out, even if the poor job by some of the non-professional extras or supporting actors threaten to derail the scenes.

The film also gives a very interesting look into life in rural Philippines, with its interesting mix of traditions and superstitions. The comparison of the witch-hunt the netizens and authorities indulge in with a spirit-expelling ritual a local shaman is shown doing is quite poignant. Rommel Sales’s cinematography makes excellent use of mostly natural light to showcase the beauty of the director’s native town of Pandan, Antique province. Len Calvo’s ominous music pops in every now and then to herald the troubles about to befall John Denver and furthers the tension in opportune scenes. Benjo Ferrer III edits the film to keep a steady, forward momentum, making it progress along briskly.

As the film builds up to the fatalist climax, the film ends up being a wake-up call for students, parents and authorities alike, in addition to being a call-to-arms to get a system in place against such incidences happening or a point of contact where students facing such issues can open up and express themselves. A timely, accurate and important film, “John Denver” ultimately is exactly as impactful as it needs to be. 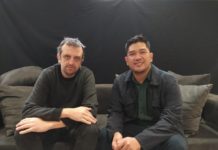 Interview with Arden Rod Condez: Philippines as a culture is not prepared for social media