Arguably among the most beautiful works of cinema, Sergei Parajanov’s “The Colour of Pomegranates” has been called a work of lasting artistry, offering breathtaking imagery while also giving what might just be the most accurate account of the poet’s mind. In this case, the poet in question is Sayat-Nova, an Armenian poet and troubadour, whose life and work is the foundation for Parajanov’s film which was originally titled after the poet himself. However, when the Soviet censors laid eyes on the finished film, the argued Parajanov’s movie does not give a portrayal of the poet, nothing about his fame and importance for literature or indeed for the country, a dispute which eventually resulted in the censors re-naming the film “The Colour of Pomegranates” and the removal of all references to Sayat-Nova in the film. 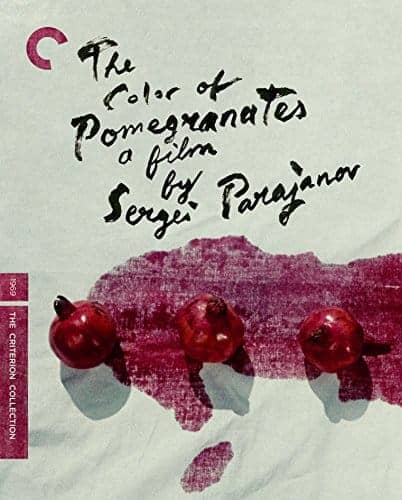 Considering it does not follow a traditional, linear narrative, Parajanov relies mostly on images, some of which show religious symbols while others seem to have their roots within Armenian culture, the world of poetry, and even superstition. Divided into chapters – Childhood, Youth, Prince’s Court, The Monastery, The Dream, Old Age, The Angel of Death and Death – the film focuses on various stages of the poet’s life, shedding some light into such themes as the artist’s relationship to society, especially religion and faith, as well as the poet and his work, his language and his symbols. The film’s images are accompanied by several recurring musical themes from composer Tigran Mansuryan, also blending Armenian folklore and religious concepts.

Similar to his previous feature “Shadows of Forgotten Ancestors”, “The Colour of Pomegranates” offers a rich audiovisual tapestry for his viewer, a stream of images and music both enchanting and hypnotic. Given its poetic nature, Parajanov’s cinema has been compared to the works of director Andrei Tarkovsky, who was a close friend to Parajanov and who also had to suffer under the rigid rules of Soviet censorship. Indeed you might argue whether Parajanov came actually very close or even achieved what Tarkovsky once called the blend of poetry with film in his essay “Sculpting in Time”. The repeated image of actress Sofiko Chiaurelli putting on various garments or pieces of fabric in front of her closed eyes may be one of the most haunting and lasting impressions from the movie, an effect created through the combination of the various elements of film. In other words, Parajanov, together with his DOP Suren Shakhbazyan utilizes the cinematic language in the same way a poet would use words, symbols and various references.

However, while the cinematic tapestry or collage is certainly complex and highly artistic, it is by no means hermetic. As the film follows the various stages of the poet’s life, the audience begins to realize we are indeed witnessing the development of a human being, the process of being in the world, of constituting meaning and emotions as well as the everlasting search for love, which is a common thread in all of the chapters. The mystification of the world, achieved through the poet’s words and images, is by no means a way to create distance, but also a way of approaching something which is too abstract, emotional or complicated to be put into words (or for that matter a concrete image). In the end, Parajanov tells the story of a journey of a man finding his language, his love and his destiny, a road filled with pitfalls and failures, one which could just as well lead to one’s demise. Like in the image of the pomegranate in the film, beauty is linked to death or failure, but also the creation of something we have yet to describe or to see.

“The Colour of Pomegranates” is a work of true beauty, telling the story of a poet’s life. Weaving together concepts of faith, tradition and Armenian culture, it is a very rewarding film for those believers in the truth that can be found in art, the alternate perspectives it has to offer and how the world we know has the ability to change.