Stephen Chow is a genius. But you don’t have to take my word for it, you can take his numbers: the number of roles he successfully performs in film-making (writer, director, actor, producer…), the number of genres he successfully mixes in his hotchpotch fantasies (comedy, drama, romance, horror…), and the number of record-breaking successful blockbusters he’s responsible for (Shaolin Soccer, Kung-Fu Hustle, Journey to the West…). With so much going on for him, we are so glad to present you this: an interview with Stephen Chow. 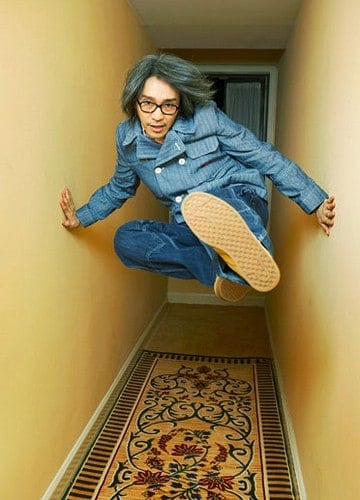 More than a simple performer, a one-man-orchestra; and more than a simple star, a one-man-constellation, Mr. Chow stand out not only for doing a lot, but also for doing it differently, as he almost single-handedly brought to life a new comedy genre: mo lei tau, his special kind of absurd humour, that is further developed in his latest hit: ‘Journey to the West’.

Q: Although  ‘mo lei tau’ means something like ‘nonsense’, many authors believe that comedy has to be ultimately truthful in some level, in order to be really funny. Do you agree with this? Which truths do you explore in ‘Journey to the West’?

A: In ‘Journey To The West’, I want to explore the true beauty in all beings.  I agree that everyday life elements provide important ideas for comedies.

‘Journey to the West’ is a loose adaptation of the first part of a classic Chinese 16th century novel. In Mr. Chow, however, pays more attention to the personal growth of its protagonist, monk Xuan Zang, incorporating new symbolic elements, like a nursery rhymes book to be used as a “weapon” against demons, in order to rescue the demon’s true good nature in opposition to the other demon hunters’ violent methods.

Q: But this rhymes prove useless until the order of the words are somehow altered to form a powerful Sutra. What does this symbolize in your movie?

A: The rhymes were useless in the beginning because the main character of the movie has to go through a personal development in order to understand the meaning of true love.

Mr. Chow was a pioneer in the use of intensive CGI in comedy, as showcased in smash hits “Shaolin Soccer” and “Kung-Fu Hustle”, an example followed by a myriad of productions nowadays.

Q: Does this mean that is harder now to surprise the audience than back in 2001? Does technical advances make original thinking and imagination even more important than in the past?

A: CGI provides a great platform for us as moviemakers; it helps to bring our imaginations to our audience.  It gives us a lot of freedom in terms of what we want to achieve.

‘Journey to the West’ is the first film directed by Stephen Chow in which he doesn’t take part also as an actor, although he even had experience portraying the Monkey King in a couple of 90’s productions.

Q: Why this decision to not appear on-screen?

A:  There isn’t a role that is suitable for me in the movie.

Mr. Chow has made a habit of focusing his narratives in common men and women. ‘Journey to the West’ isn’t different. The original tale is populated by highborns (like the Emperor) and powerful spirits (like Guanyin), which, in fact, are the reason for the journey itself. But this first filmic instalment, at least, focus only in everyday folk.

Q: Why did you decide to make this story more mundane?

A: This movie is focusing on the journey of the lead character Tang Sanzang and his experience of enlightenment before he got his disciples and embarked on the Journey to the West.   Hence, we didn’t feature the Emperor nor Guanyin.

Q: The movie ends with an obviously open door to other movies to narrate the journey to the west itself. Will there be sequels? If so, what are their development status?

A:  Journey to the West includes many different elements/ storylines.  In fact, I am in the process of creating elements for the sequel.

A sequel we wait for anxiously.

The AMP crew wants to thank Mr. Chow so much for taking the time to answer our questions, and wish him success in all his endeavours (a pretty safe bet, if you ask us).

‘Journey to the West’ – TRAILER:

Interview with Yoshihiro Nishimura: What I create is entertainment

Interview with Huang Huang: Wushu, as a martial art, is in many ways a cultural symbol.