“National Security” is a unique entry in the field, because apart from the thriller element, it could only be described as sociopolitical exploitation, since for the most part, it consists of scenes of a man being tortured.

The script is based on the memoir by Kim Geun-tae, a democracy activist who was kidnapped and tortured by national police for 22 days, and who later on became a minister of the government. It describes the facts before, but mainly during these 22 days when he was tortured in the Korean Central Intelligence Agency, initially by “police officers” and later by a head interrogator nicknamed “The Undertaker”.

Chung Ji-young directs a cruel film, which takes place almost exclusively in a claustrophobic environment that consists of a cell and a torture room. He pulls no punches in the depiction of the various tortures, thus resulting in a truly grotesque spectacle. In that aspect, he is largely assisted by the detailed and realistic cinematography of Seo Min-soo, which at times, results in a spectacle that touches the borders of the documentary. Furthermore, he focuses on the psychosynthesis of the torturers, in a rare tactic for characters like that. As he had stated, “I wanted to show how torture affects both the torturer and the victim.”

The film is largely based on the performance by Park Won-sang, who is magnificent in the role of an everyday man who is prosecuted by the whole system, due to his ideology. He should probably receive an award for all the suffering he had to endure during the film.

Lee Geung-young is also impressive as the cruel and relentless “Undertaker”, with his cold-blooded composure and the joy he seems to derive from the tortures he submits the prisoners. 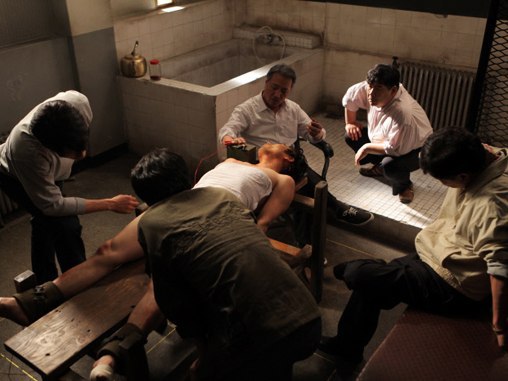 To summarize, “National Security” is a very hard to watch, although highly realistic film, that uses shock in order to present a clear political message.