Being the fourth collaboration between Kim Sung-soo and Jung Woo-sung, after “Beat” (1997), “City of The Rising Sun” (1999) and “Musa The Warrior” (2001), and featuring an all star cast, “Asura: The City of Madness” was one of the most anticipated films of the year. However, and in contrast to the global rule that wants films that create much buzz to lack quality, this time, the hype was absolutely justified.

Everyone is a criminal.

Han Do-kyung is a corrupted detective, who actually works for the even more corrupted Mayor of the city of Annam, Park Sung-bae, in order to pay his wife’s medical bills, who has been diagnosed with terminal cancer. Park wants to push through a multi-million-dollar development contract that will transform the city’s slums into modern housing, and make him a ton of money in the process. In order to do so, he is willing to go to any extremes, with Han being the one who takes care of the “dirty work.”

The DA, however, is on to Park, and has even found a witness that will testify against him. Han is the one tasked with dealing with the witness, in a series of events, though, that end up with a fellow police officer dead and “Junkie,” a drug addict who helped him with the witness, being accused of his murder.

As Han is about to quit the police force and work openly for Park, he is approached by Internal Affairs, headed by special prosecutor Kim Cha-in and the leader of the investigation team, Do Chang-hak. They present him with proofs of his misdeeds and force him to turn against the Mayor.

This series of events force him to retract his resignation and instead abandon Park. In order to do so, he persuades his best friend, Moon Sun-mo, to take his place.

As both opposing sides continue finding leverage with him, Han’s situation worsens even more.

Kim Sung-soo directs and pens a very dark film that focuses on its characters, none of whom is even remotely decent or likeable. Han may have been led to this life by his wife’s sickness, but shows no remorse in executing Park’s hideous orders. The fact that he tricks his best friend into taking his place makes him even more despicable, despite the fact that he is actually the victim of a power struggle between powers much higher than him.

Mayor Park is corrupted to the core, a true gangster who not only has connections with the underworld, but also acts as the leader of a crime syndicate. The fact that he has been publicly elected is a clear evidence of both his power and the city’s decay.

Special Prosecutor Kim and Do Chang-hak, who actually acts as his henchman, may have the law on their side, but they are willing to go to such extremes to arrest Park, that they end up acting like criminals themselves.

Moon Sun-mo may be tricked into Park’s service, but as soon as he “tastes blood” and money, he becomes a remorseless gangster too.

The power struggles between all the above characters, along with the constant shifting of both loyalties and the upper hand, are the backbone of an intricate script, which is concluded, in the most spectacular fashion, in the final sequence of the film.

Furthermore, Kim presents a clear message regarding corruption, which, according to him, touches every aspect of Korean society, including justice and politics.

Since the film is largely based on its characters, the acting plays a rather significant role. Jung Woo-sung is great as detective Han, presenting a character that explodes under the pressure that comes from every aspect of his life. The fact that an actor who is frequently cast in the role of the “lover” has his image utterly trashed was a bold move, but he delivered to the fullest.

Hwang Jun-min as Mayor Park once more steals the show, this time in the role of the villain, which seems to suit him perfectly. I dare say that his performance reminded me of Robert De Niro in his gangster movies.

Kwak Do-won is also great as the “legitimate criminal,” with his acting in the final sequence being the highlight of his performance.

Jeong Man-sik as Do Chang-hak, and Ju Ji-hoon as Moon-sun Mo provide some great secondary characters, with the latter’s transformation to a hardcore criminal being quite impressive.

The city slums make a great environment for the story, as the narrow streets and the rundown houses mirror the characters’ psyche. Violence and blood is everywhere, and there seems to be no escape for anyone caught in their spiral.

In that aspect, “Asura” features many and impressive action scenes, with the beatings and the killings being almost constant. The car chase in the rain and the final sequence that takes a very large part of the film’s duration are the ones that stand apart.

Technically the film is a masterpiece, with Lee Mo-gae’s cinematography presenting elaborate images of both beauty and decay. A number of panoramic views of the city stand out. The editing is also masterful, as it helps retain the film’s fast pace and the permeating sense of claustrophobia, which derives from Han and the setting of the city. The music, which features some wonderfully implemented blues songs, is another point of excellence.

“Asura: The City of Madness” is a true masterpiece, a film that delivers in all aspects, and one of the greatest entries in the crime thriller genre.

“Asura: City of Madness” had its world premiere at Toronto International Film Festival, and is part of the wonderful Asian selection of this year’s edition, that will be on until September, 18. 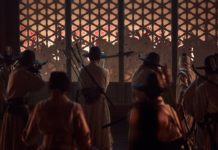 “Along With The Gods: The Last 49 Days” Debuts on Digital, Blu-ray™ Combo Pack & DVD December 11