In 1967, Shaw Brothers released The One-Armed Swordsman, starring Jimmy Wang Yu and directed by Chang Chen. It became an instant classic wuxia movie overnight and in 1995, we have this updated version, wonderfully directed by Tsui Hark. 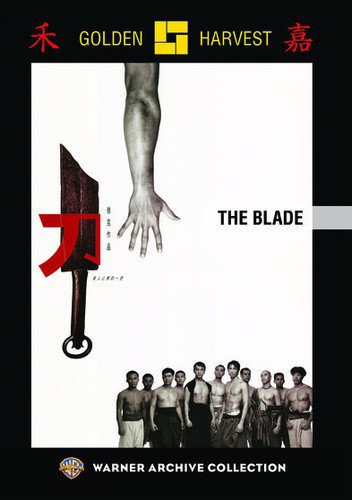 The story is pretty much the same, an orphaned handicap young man seeking revenge after he trained himself into a master swordsman. However, in the capable hands of Tsui Hark, the movie has turned into an even more violent, moody tale of revenge masterpiece.

“The Blade” stars Vincent Zhao (Green Snake, Once Upon A Time in China IV) as Ding On, an orphan who works and lives in a saber making factory, and his best mate is Iron Head, played here by Moses Chan. In fact, the factory owner’s daughter, Ling (plays by Song Lei) has a crash on both of them and she also narrates the whole movie. One day, after Ding On finds out that Fei Lung, a heavily tattooed bandit is his father’s killer, he sets out for revenge, armed with his father’s broken saber. Besides, he’s also given the chance to run the saber factory which he’s not interested in the first place.

However, before he even gets close to Fei Lung, the bandits chop off his right arm and he falls off a cliff. Fortunately, he is rescued and nursed back to life. Accordingly, he discovers a saber training manual, polishes up his fighting skills and looks for Fei Lung again. This is where the viewers are treated to one hell of a final fight in any movie.

Vincent Zhao and Moses Chan are perfectly cast here, they are not the typical do-good heroes, they are desperate men, at times even cold as they fight for survival and they do unheroic things to achieve their goal. Song Lai’s character Ling is probably the saddest; she’s sheltered from the outside world, she looks for love and never gets it.

However, full credit goes to the wonderful Valeri Chow, who’s impressive as the village prostitute. She has a great presence, together with her great looks; she absolutely drives all the men crazy. But underneath, there is this sadness and loneliness which she portrays effortlessly.

Xiong Xin Xin (Clubfoot from Once Upon a Time in China III) plays Fei Lung or Flying Dragon in Chinese, the movie’s main villain and the bandit who kills Ding On’s father. He is pure evil and taking any human life is nothing to him and Xiong nails the role.

“The Blade” is a very dark and dusty looking movie; the desert setting makes it look like a Western at times. Its theme is rather depressing and there is hardly any love or happiness. Tsui Hark’s wuxia world here is cruel, uninviting and brutal, even monks are not safe walking the streets. However, it’s populated by interesting characters that seem doomed and survival of the fittest is the go.

On the other hand, the editing of this movie is the real hero, as seen in the final fight. It’s jaw-dropping furious, powerful and a character by itself.

“The Blade” is definitely Tsui Hark at his most creative and exploratory mode. Don’t miss it.

Interview with Mohammad Reza Keivanfar: The basis of any kind of...