The 2014 sinking of the MV Sewol ferry is arguably the most tragic event in recent South Korean history, which resulted in 304 deaths, most of which were high school students. Director Lee Jong-eon uses the tragedy as the backdrop to tell the story of a family coping with the loss of the elder son in his debut film “Birthday”.

Jung-Il and Soon-Nam are a married couple. Their elder son died tragically. Jung-Il feels guilt that he was not there with his family when his son died. Soon-Nam misses her son dearly and supports her family by working at grocery store. The film explores the family dynamic as they cope with the grief and learn to embrace each other

Director Lee Jong-eon brings to the film his experience as an assistant director on Lee Chang-dong’s “Poetry” and a script supervisor on “Secret Sunshine”. The film brings back stars Sol Kyung-gu (“Memoir of a Murderer”, “Oasis”) and Jeon Do-yeon (“The Shameless”, “Secret Sunshine”) together 18 years after they worked on “I Wish I had a Wife”. It is scheduled to release in South Korea on April 3rd, 2019. Be sure to take some tissues with you. 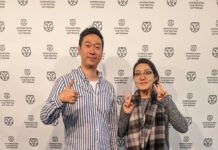 Interview with Kim Young-hoon: “[I wanted to make] something that the audience can relate to, but also have fun watching.”