A Shaw Brothers production, this movie is about Wu Sung, a famous character from the classic novel ‘Outlaws of the Marsh’ or ‘The Water Margin’. Often described as a muscular and respectable man, Wu Sung also likes his wine; however, he’s greatly renowned for killing a tiger with his bare hands. 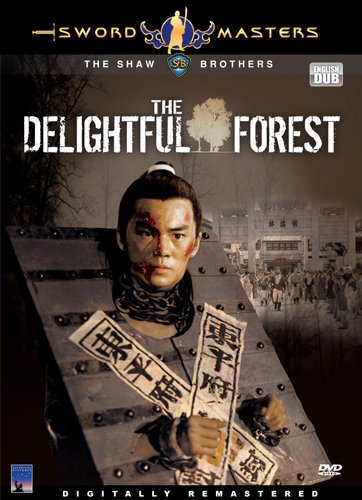 At the start of “The Delightful Forest”, Wu Song is out to avenge his brother, upon learning that he was killed by his adulteress sister-in-law Pan Jin Lian and her lover Ximen Qing. Since he has already killed Pan, it’s time to settle the score with Ximen Qing. Being a righteous man who owns up to whatever he does, Wu Song is sent to prison after killing Ximen. Interestingly, with the help of an officer Shih En, he is treated exceedingly well there and even escapes the traditional punishment. In return, Wu Song agrees to help Shih En get rid of a bullying thug named Chiang Chang in a town call Delightful Forest where he has an interest in a gambling den.

After their confrontation, Chiang Chang is driven out of town which leads him to plot revenge and Wu Song is soon being framed for stealing from an officer. Accordingly, he’s exiled to another prison, but on his way there, he becomes the target of an assassination plot. Of course, Wu Song is able to defend himself and the movie comes to a brutal end where he takes on Chiang Chang again and the corrupt officer.

The role of Wu Song is wonderfully played by none other than Ti Lung, one of Shaw Brothers most dashing wuxia actors; he’s also skilled in the Wing Chun style of martial arts. Ti Lung’s take on Wu Song is a spot on; we can see a virtuous man, likable and full of energy. As always, he’s not shy to boast about how he kills a tiger with his bare hands and he’s ready to kill evil people. Furthermore, he likes to drink, he believes drinking makes him more powerful, and therefore we see him drinking all the time throughout the movie.

Chu Mu plays the villain Chiang Chang, the thug who courses trouble in the town of Delightful Forest. Chu Mu is more than adequate and does a decent job here being unpleasant and ruthless. There’s a respectable officer Shih En, portrayed by Tien Ching, who takes care of Wu Song in prison. This is not a demanding role and he’s just the typical virtuous guy in any Shaw Brothers movie, same as the rest of the minor characters. When it comes to the corrupted officer and villains, they only need to act mean with bust of evil laughs thrown in every so often.

As predicted, there’re plenty of fights in “The Delightful Forest”, but the final one is particularly brutal and bloody, after all this is directed by Chang Cheh. Furthermore, we get to see Ti Lung displaying his skills with the broadsword, besides the usual bare hand combat and high kicks. Slow motion is also used quite a lot to emphasize the impact of the action.

Overall, this is one of Shaw Brothers better movies, entertaining all the way through and action packed. Having the charming Ti Lung in the lead is the icing on the cake.