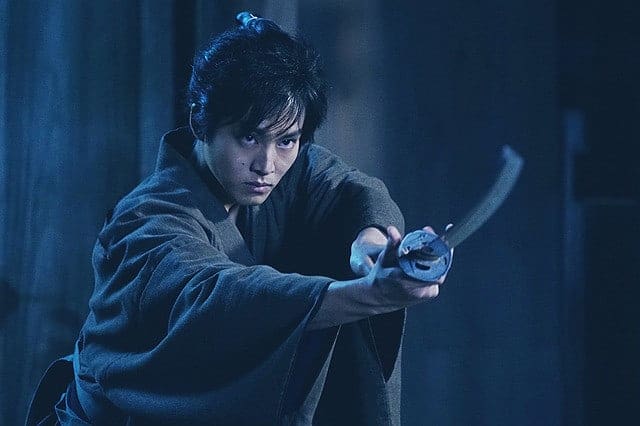 After dealing with the samurai genre in comedic style with the two “Samurai Hustle” movies, (and after the excellent “Recall” of last year) Katsuhide Motoki decided to tackle the category with a more serious approach, in a film based on the novel series “Inemuri Iwane Edo Zoshi” by Yasuhide Saeki.

Iwane: Sword of Serenity is screening at the Toronto Japanese Film Festival

The story is split in two parts. In the first one, and as the story begins, the titular character is studying swordsmanship in a dojo in Edo with his two childhood friends, Kinpei and Shinnosuke. Kinpei has two sisters; Mao, who is married to Shinnosuke, and Nao who will marry Iwane. When they return to their home county though, tragedy strikes immediately. Shinnosuke’s uncle shares a rumor with him that Mao is having an affair, and an enraged Shinnosuke ends up killing her the same night. Kinpei then kills the uncle and his childhood friend in retaliation, and goes into a fit that has him killing anyone that dares try to arrest him. Iwane is ordered by the local lord to kill his friend.

The second part finds a traumatized Iwane having abandoned the ways of the samurai and his past life completely, living in a row house in Edo and making a living filleting eels. Eventually, with the help of his landlord, Kinbe, he finds a job as a bodyguard for a reputable money exchanger, Imazuya, where Okon, Kinbe’s daughter also works. Okon soon starts having feelings for Iwane, who soon finds out that Imazuya is being targeted in a conspiracy to sabotage a new monetary system implemented by the government, involving a local corrupt mogul, Urakusai. Iwane decides to protect the people he cares about now, despite still suffering from the events back home.

Katsuhide Motoki directs a movie that takes full advantage of the two arcs, with the first one being a genuine samurai tale and the second one adding a financial twist, in order to present a rather entertaining movie that manages to retain the interest for the whole of its 121 minutes. And while the first part includes excellent action scenes and a great build up of the story, it is the second one that truly makes a difference, since it retains the elaborate action but also adds much depth through a twist about corruption in a society that is much more capitalistic that one would imagine (at least considering the way the era is presented on cinema). Particularly the concept of something that could only be described as a bank run is greatly implemented into the narrative, making a comment about the way capitalism worked at the time (and still does in a way). This part actually reminded me much of the late James Clavell’s “Noble House”, in a semblance that could only be perceived as a great compliment. The fact that the whole issue is resolved when the government is involved directly could be perceived as a rightist-remark, although the fact that the system allowed corruption in such a level evens the whole deal, as is the case with the involvement of both corrupt and noble financiers.

At the same time, and particularly the first part makes a rather harsh comment about Bushido, presenting the code of the samurai as a totally unrealistic one (not to mention the way it dealt with women), that usually ended up in tragedy. This aspect capitalizes in the rather dramatic finale, which connects the story to the first part in impressive fashion.

The production values of the film are on a very high level. The orange hues in the first part and the brown in the second fit the narrative perfectly, as Masahiko Yasuda has done a very competent job in the cinematography department, both in the action and in the calm scenes. Some images of the sky and sea in the first part are somewhat excessive in their presentation, but the overall visual approach lingers towards realism. This aspect extends to the many and excellently choreographed battles, that also highlight the impressive job done in the editing department. The pace of the film is fast, with the frequent cuts allowing the story to unfold in a very entertaining fashion.

Tori Matsuzaka (who seems to be everywhere recently) is quite good in the role of noble but struggling samurai, in a part that seems to be tailored for both his acting abilities and his looks. From the rest of the roles, Fumino Kimura is delightful as Okon, while Akira Emoto as Urakusai makes for a truly despicable villain.

“Iwane: Sword of Serenity” is a rather entertaining samurai movie, that manages to stand out from the plethora of similar productions (and to overcome being somewhat generic) by implementing a financial aspect rarely depicted in the genre.

Film Review: They Say Nothing Stays the Same (2019) by Joe Odagiri