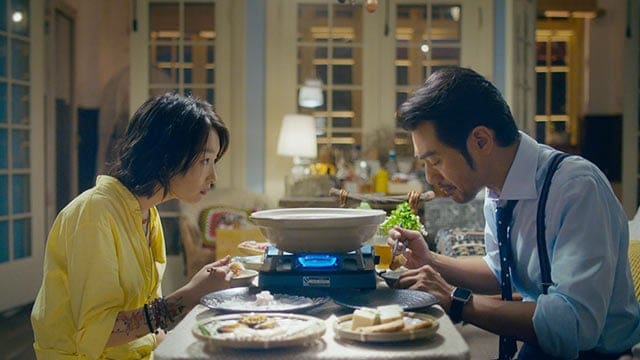 In Ritesh Batra’s 2013 Indian film ‘The Lunchbox,’ romance blossoms between two strangers through food. While being alarmingly charming, ‘The Lunchbox’ was also incredibly honest, grounded and real. Derek Hui’s ‘This Is Not What I Expected’, quite ironic to its title, is not only everything you would expect but is also so timidly clichéd that it never leaves you with enough meat to chew on.

“This Is Not What I Expected!” screened at the New York Asian Film Festival

Based on Lan Bai Se’s novel ‘Finally, I Get You’, the film opens with Lu Jin (Takeshi Kaneshiro), a stiff, well-dressed and overly self-conscious multi-millionaire. His job is to visit and acquire hotels, making them a part of his own company. While on inspection he also likes to sit alone and eat the various cuisines that the hotels have to offer. He has made it a habit of finding flaws in everything a chef cooks. He isn’t the kind of guy who would hold back on his insults either.

On his latest endeavour to a hotel named ‘Rosebud’, his taste buds start swirling as he is completely sold-out on the kind of emotions a chef has induced into one of her recipes.  However, he is completely unaware of the fact that the chef is Gu Shengnan (Zhou Dongyu), a feisty, young, troublemaker who has caused a havoc for his ongoing visit. What follows is a supposedly charming back and forth, where the two mismatched people have to cross paths in spite of them hating each other’s guts.

For a romantic comedy to work, you need at least a set of larger than life characters who can fill up the screen with an overabundance of charm and some finely grilled, abide a bit cheesy – chemistry. Derek Hui’s film lacks both the charm and the chemistry. As an emotionless but supposedly well-read multi-millionaire, Lu Jin is presented as a man who would stuff a woman into a suitcase in order to get rid of her but still fall for her when she could cook with such passion. Gu Shengnan, on the other hand, is presented as a woman who would take someone body-shamming her (literally pointing at her for not having enough meat in her body) but hates and loves a man who doesn’t have emotions.

In trying to forcefully bring his two mismatched characters together, Hui tries every trick in the book of rom-com cliches. He even makes a cringe-worthy attempt at romance between Lu Jin’s secretary and Gu Shengnan’s internet-celebrity friend cum roommate. The influences that range from Blake Edwards’s “Breakfast at Tiffany’s” to Nora Ephron’s “You’ve Got Mail”, all fail to deliver when Hui’s characters turn into mere caricatures and the very little charm that the actors bring to the screen are automatically crushed by constant and completely obnoxious edits and scene transitions. Takeshi Kaneshiro (know for Chunking Express) & Zhou Dongyu both are good actors but they have been made to play over exaggerated and loud versions of the characters that could have made sense in a distant reality.

The soundtrack that features Blood Relative, My Morning Jacket & a lot of Bob Dylan all point towards an evident and even overblown Hollywood remake. There’s a nice little homage to Juzo Itami’s “Tampopo” where the lead character wishes to make the perfect noodles. There’s also a scene where the two trip on blowfish that’s genuinely charming. Also, if you are a gourmand, the close cuts and edits in the scenes that involve food all revoke an irresistible joy in your stomach. But mostly, everything else in Derek Hui’s “This Is Not What I Expected” is pretty tasteless.