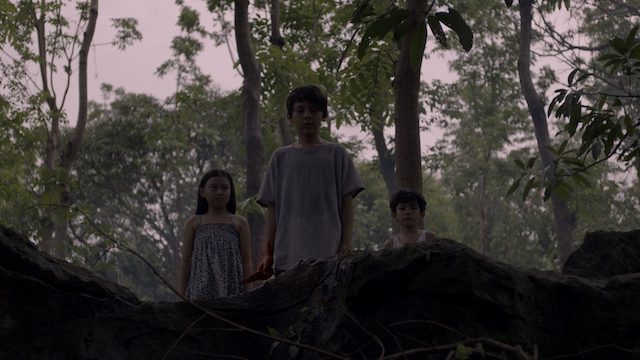 Having just recently made the jump from shorts to feature films, upcoming Philippine genre director Kenneth Lim Dagatan continues to move in a positive direction in his homeland from his earlier slasher “Bloody Crayons.” Taking a more esoteric and spiritual route with his new genre film “Ma,” the film is now screening as part of the New York Asian Film Festival for its international premiere.

Living in the middle of the woods, young Samuel (Kyle Espiritu) discovers a strange cave in the middle of the forest that features a single tree growing deep inside. As he’s able to converse with the tree, he slowly grows to believeit is able to deliver on a promise about bringing a loved one back to life. When his mother Lina (Glydel Mercado) dies, he sees that as the perfect time to test out the trees’ promise but is halted when Gelyn (Kate Alejandrino) and her friend Cecille (Anna Luna) arrive to live in the village following her husbands’ death and upcoming pregnancy. Realizing the unborn child is the key to fulfilling his wish to bring his mother back, they are forced to extreme and brutal methods to get their wish to come true.

Overall, ‘Ma’ manages to work pretty effectively. A lot of the film’s positives are due to the strong and emotionally powerful storyline from writer/director Dagatan that merges together some genuinely strong drama with the horror. Taking the theme of loss and grief to the children who have recently lost their beloved mother gives this a special realistic bond that carries throughout the film. Seeing these early scenes of the family completely at a loss for how to treat her when she’s at death’s doorstep and then when she finally passes on, spurs their sense of confusion and bewilderment at how to treat it. Being unable to cope with the situation and treating her as a member of the family still that won’t eat and doesn’t respond to anything they tell her until they’re finally forced to turn to the supernatural to deal with it, makes a lot of sense. Given that this is mirrored against the Aunt arriving to deal with the final months of her own pregnancy, widowed from her husband and just as lonely, as the kids manage to parallel, these situations unfold rather nicely and have a lot to like.

On top of that, there’s also the film’s impressive horror atmosphere. The central cave that’s so important to the central setup is incredibly eerie and foreboding as the massive size and central location for the ceremony to take place. Being that it’s out in the middle of nowhere, it’s entirely possible the entire situation might be true or simply made up in his head due to the remoteness of the location. From there, the pregnancy scares that arrive here, from the feeling of loneliness and sadness at being unable to share such a situation with anyone, to the strange hallucinations of Cecille vomiting up blood and other fluids during morning pregnancy situations or following the spirit of her husband out into the woods nearby where she has her own encounter with the being in the cave, give the film some needed horror tension during the lengthy drama interludes. Things do pick up in the finale, where there’s the fine double-cross by the cave-spirit which causes all manner of fun and chilling action to occur where it goes to the extreme in a great way and provides a bloody, chilling finish.

However, ‘Ma’ does have a few minor issues. The biggest problem here is the sheer improbability of the living condition they live in, where we first meet the mother literally puking and coughing up blood, a situation far more removed than having a sick relative stay at home. No child would be forced to stay in that situation, especially ones the age of the young kids here, which, granted, does the job of getting this going, but easily could’ve been more realistic about doing it. Likewise, the fact that the general pacing is quite slow and tempered, content to slowly build its atmosphere and scenario without going into a full-on charge means this one might come off as far too bland and dull when it’s not constantly throwing tons of action at the screen. What’s there is well done and really enhances the mood, but it’s not often enough for some viewers and will result in this feeling boring at times due to that.

With a lot of strong drama elements and startling horror sequences, ‘Ma’ has some great features which are what makes for an enjoyable time over its few minor flaws. Give this a chance if you’re looking for some enjoyable horror-themed dramas or are curious about the film, while those turned off by the flaws should heed caution.

Interview with Director Kenneth Lim Dagatan: I make horror films for me, because it’s a love letter to my childhood stories.