Wai Ka-fai is no stranger to Hong Kong cinema and is best known for his collaboration with Johnnie To. Together they formed the very successful Milkyway Image independent film studio producing films like “Needing You”, “Fulltime Killer”, “Mad Detective” and so on. However, “Peace Hotel” is his first as a film director. 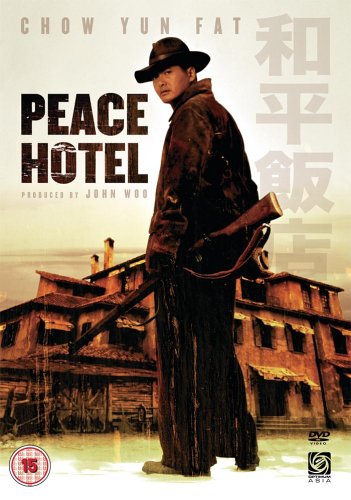 After making “Peace Hotel”, Chow Yun-fat said goodbye to Hong Kong and headed west to Hollywood. He also shares writing credits with director Wai Ka-fai whereas John Woo is credited as the producer. So there is a bit of film history associated with this film, interestingly, the Chinese title translates it as “Peace Restaurant” rather than “Peace Hotel”.

Chow Yun-fat plays a man with no name, but everyone knows him as ‘King of Killers’. Throughout the beautifully shot opening, we learn that his wife is killed and he’s killing off bandits from floor to floor in a big building with his sword. However, at the last moment, he sees some kind of light and decides to spare the last remaining young bandit. Consequently, he lays his weapon down and converts the building into a Peace Hotel; a sanctuary in which anyone that needs protection from the outside world can live there in peace. Because of his reputation, outsiders are actually afraid to go in there to harm the residents.

One day, a woman arrives at the hotel, clamming to be the Killer’s wife and seeks shelter. The bandits that chase after her demand her back or they will raid and kill everyone there. Cecilia Yip plays the multi-faceted woman Shau Siuman who obviously has something to hide and not what she seems to be. She’s fiery, vibrant and does a good job of causing trouble in this peaceful hotel. Cecilia sure handles her part well and proves to be quite a good match for Chow Yun-fat.

Needless to say, this is a Chow Yun-fat film; he’s charismatic as always and commands your attention. After all, he’s foremost an actor showing his acting chops while chewing up the scenery throughout. However, there are some strange encounters where his character slaps Shau Siuman around and that seems rather odd. His weapon of choice here is actually a sword instead of guns. Other supporting characters that stand out are the three blind men who add some humour.

“Peace Hotel” has a very Western look especially with those dusty and windy outdoor shots in which director Wai Ka-fai uses lots of earthy brown colours. It actually looks very much like Wong Kar-Wai’s “Ashes of Time”, even more so when seeing the Killer cutting down bandits with his sword. Indoor shots are more calm and peaceful, apart from the final shootout and flashbacks, which are shot in striking black and white plus a decent use of slow motion.

Even so, “Peace Hotel” is stylish and full of atmosphere. It’s able to create a time and space for it’s larger than life character to live in. It’s both a Wu Xia and Western film roll into one, but don’t expect an all-out action packed film.