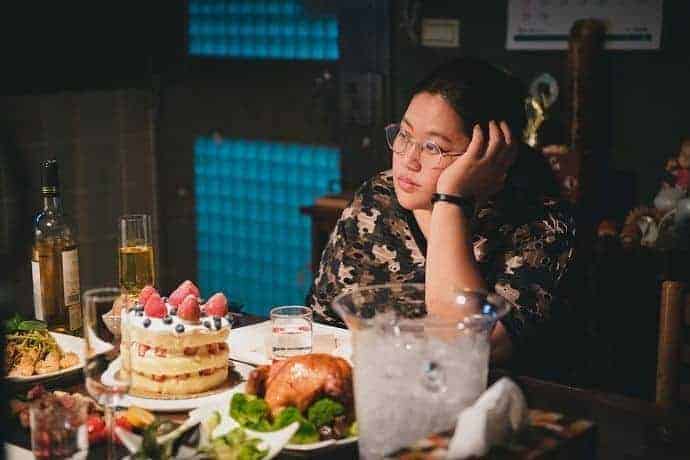 After the segment “A Making-Of” in “Ten Years Taiwan” and two more shorts, it was time for Hsieh Pei-ju to shoot her first feature, an effort that succeeded in full, with the film already netting her Best New Talent at Taipei Film Awards and the Audience Choice Award at International New Talent Competition of the 21st Taipei FF.

“Heavy Craving” is screening at the Taiwan Biennial Film Festival

30-year-old Ying-juan is a talented chef that works in a childcare center run by her mother, teaching cooking classes for children. Despite her abilities, though, and her kind nature, the only thing people notice when they look at her is the fact that she weighs 105 kilos. Her students mock her, kids on the street go as far as to throw eggs at her, and her mother, who looks like a fashion model, does not stop criticizing her. Even worse, her elderly next-door neighbor decides one day to show his “feelings” by groping her, in a series of events that has her pushing him down the stairs and his wife accusing her for attacking him, since no one seems to believe that a man would want something more from her. Fortunately, for her, a guardian-angel in the form of a delivery man named Wu appears at that moment to successfully defend her, with the two eventually becoming friends, particularly since he lets her know that he was also obese in the past. Ying-juan decides to attend a weight-loss institute, while she also strikes a friendship with a student of hers, Xiao-yu, who likes to dress in women’s clothes, despite his mother’s protests. Things start picking up for her, but eventually the truth, reality, and even her own self, come crashing.

Hsieh Pei-ju directs a film that takes a rather hard swing at the whole concept of the “necessity of being thin”, presenting it and the reasons of its existence, with the darkest colors. The fact that this notion has a deeper root in people’s conscience, since the majority seems to care just for outer appearances instead of actual character, is also presented quite eloquently through all the people that surround Ying-juan and the weight-loss institute that also highlights a comment on how capitalism has been taking advantage of these notions (through food “supplements” for example). In this kind of setting, and despite the fact that she seems to be all right with herself and her appearance, she cannot function, in essence, because all the people around her either neglect her (her mother and men) or are simply harsh towards her (almost everyone else).

However, the great thing about the narrative is that Hsieh does not idealize the situation presenting a story with multiple happy endings, but instead one filled with hard realism, as, despite the way people who are considered “different” by the majority feel, the majority will still look at them with the same, almost disgusted eyes. The scene where Xiao-yu’s mother yells to Ying-juan that his tendency to wear women’s clothes will only make his life harder on him is actually the bitter truth and no one can blame the mother for not allowing her son to do as he wants.

The inevitable solution that Hsieh suggests is that one must have a true “fight” with his “potential” self (the one who people expects you to be ) and his actual one in order to accept the second, and also to manage, first, not to be affected by other people’s opinion and second, occasionally to be willing to “fight back”. The surrealistic, violent scene that presents the aforementioned is the most visually impressive in the film, as Chang Hao-jan’s (a bit too bright and polished) cinematography finds its apogee here.

Tang Yi-fei’s editing retains a relatively fast pace that suits the overall aesthetics quite well, while the fact that he kept the duration at 90 minutes is also a tick in the pros column.

The movie benefits the most by the acting, with Tsai Jia-yin giving a great performance as Ying-juan, highlighting a plethora of sentiments including disappointment, anger, and happiness in the most artful way, without even having to talk that much. Chang En-wei is also great as the cross-dresser Xiao-yu, with the scene with his performance being his highlight, while Hsieh Tsu-wu gives a magnificent performance as the owner of the institute, with him being the main medium of the comments about appearances Hsieh wanted to make. The scene where he weighs all his “students” and reacts according to their performance is one of the best in the film.

“Heavy Craving” is pointy, realistic and filled with context, but also quite entertaining and easy to watch, and this combination is where its true value lies.

Interview with Hsieh Pei-ju: In real life, we have different kinds of people and I feel we should show them more on screen

A Taste of Five Flavours Festival: all the Films in the Competition Section. Full Programme to be announced on 24 October!