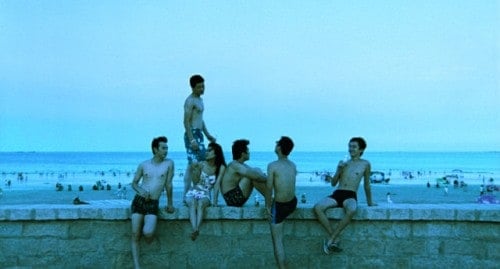 Robin Weng’s debut was produced by several independent companies in China and abroad, and features mostly non-professional actors.  The film screened in a number of festivals around the world and won a Dragons and Tigers Award from the 2007 Vancouver International Film Festival.

The script follows several characters in two different but interweaving stories that take place in the southeastern coastal province of Fujian, a notorious area considered the center of drug and human trafficking and illegal immigration in China. The first story, entitled “Neon Knights” follows the homonymous gang in Fuqing, and particularly America and Roppongi who front the gang, with the latter being the leader. The gang members spend most of their time dancing and singing in karaoke parlors and roaming the streets aimlessly. However, in order to make money, they videotape and blackmail rich women who have affairs. Their practice and particularly America are put on test when he catches his own mother in the act. Furthermore, even she is part of a human trafficking ring, headed by a man known as The Czech.

The second story is titled “At Home at Sea” and focuses on another member of the gang, Dragon, who turns to crime in order to pay his family’s debt from smuggling his brother to Ireland, and goes into hiding after stabbing a man.

Robin Weng directs a film that focuses on realism in the very harsh setting of the area, where any kind of illegal activities is the rule. His heroes are poor delinquents, facing mostly financial problems, but also social ones, as they seem lost and trapped in a world they cannot adapt to, particularly due to the new circumstances the opening of the borders by the Chinese government has presented. In this situation, unlawfulness and emigration seem like the only way out, and in that fashion, Weng seems to “excuse” his protagonists.

Regarding the technical aspect, the film is a bit “rough” in its presentation, although the fact that this is a very small-budget movie, definitely has played a part in it. Particularly the editing by Jian Zeng is abrupt, to the point that, the succession of scenes is dizzying occasionally, chiefly due to the constant change of setting. Shang Yi’s cinematography, on the other hand, is impressive, as he follows the style of Hou Hsiao Hsen with the many long shots and the placement of the characters in the corners of the frame, in order to focus on the setting, rather than the action. Through these images, the film functions frequently as a tour guide of the area, although not of the places the tourists would visit, but rather of the slams and the poor neighborhoods where the true heart of any place beats.

The acting also moves in the same direction, with the performances focusing on realism, without any exaltation. Luo Jin, who plays Dragon, is the one that stands out, as he portrays his character’s constant sense of agony and reluctance regarding his life decisions.

“Fujian Blue” is a no-nonsense film that presents its many subjects in utter realism, and in that fashion, a great watch, particularly for the art-house audience.