After the continued success of the previous entries into the Battles Without Honor and Humanity-franchise, distributor Toei understandably called for more movies utilizing the distinct narrative and visual approach which director Kinji Fukasaku had introduced in his first film. Given the plethora of fact-based accounts of yakuza crimes and gang wars, screenwriter Kazuo Kasahara focused on a war between rivaling factions in Hiroshima and the surrounding area. In order to continue the idea of the wars of the yakuza mirroring social and political developments in Japan and the rest of the world, Fukasaku and Kasahara employed the concept the proxy war, a large variety of smaller conflicts symbolizing a chasm of power within yakuza hierarchy, a war of ideologies and, of course, for power and money. 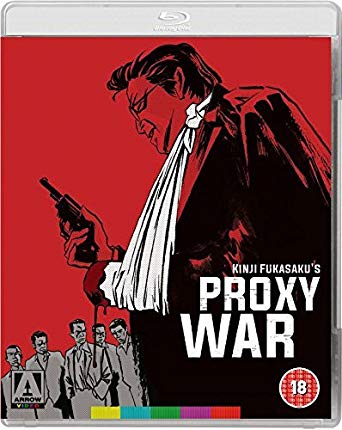 At the beginning of the film, we find Hirono in the middle of a tumultuous time within the yakuza. Having made a name for himself on the outskirts of Hiroshima guarding scrap metal with a small gang he leads, his services are once more required by the Yamamori group and its leader (Nobuo Kaneko), who needs all the manpower on his side in a fight for the succession within the powerful Muraoka yakuza family. Yamamori and his main competitor, cowardly Uchimoto (Takeshi Kato), gather their forces and forge alliances in order to have the upper hand over the other.

However, as more and more parties become involved in the rivalry of Uchimoto and Yamamori, men like Hirono soon find themselves trapped within a variety of conflicting loyalties, a powder key bound to explode with each false step.

As with the previous entries, you will soon find yourself trying to keep up with the large ensemble of clans, bosses, footsoldiers and their various links with each other. While the other films also had a large cast, the third in the series presents a more complex canvas of relationships and loyalties, a fitting, of somewhat confusing symbol of the hierarchy within the yakuza. With the establishment of the various families and their territory clearly marked, Fukasaku’s films explore the various sets of ideologies which have arisen among the various leaders, the bosses and their underlings, all of which are defined by their apparent insatiable appetite for power. Uchimoto and Yamamori, wonderfully played by Nobio Kaneko and Takeshi Sato, resemble the Janus-faced leaders, the ambitious, yet impotent bosses unable to act on their own and in need of willing soldiers or those dependent on their influences within the political circles of the country.

Although the concept of the proxy war results in much of the aforementioned confusion, it is also a clever framework, given the idea of the whole series as a metaphor for post-war Japan. The various street battles and shootings as well as the number of “business” meetings between bosses reflect the different shifts within a society and its increasing level of corruption. However, especially in the last half of the film the meetings of these men, bosses and soldiers, discussing the various degrees of loyalty, their conflicting affiliations and how they might disrespect another party become not only confusing, but increasingly tiring for the audience. Ironically, Bunta Sugawara’s Hirono seems to echo the growing sense of impatience with these meetings and two-faced people who are only loyal to themselves and would rather send others to do their dirty work, or rather fight their war.

However, since his character is at the core of these films, Bunta Sugawara’s performance also reflects the kind of cynicism and pessimism regarding the future of his country and his hope in values like loyalty. Considering he has chosen to become more active within the power struggles again, he has made his hands bloodier than he wanted to, as they are caked in the blood of young men fighting for men who would betray them if it is beneficial for them. “Better the devil you know than the angel you don’t” is one of the statements he makes in front of his man, justifying his newly forged obligation with the Yamamori family.

“Proxy War” as the third entry of the “Battles Without Honor and Humanity”-franchise continues the themes of the series while also showing the increasing amount of unrest and need for radical change within post-war Japan. Even though its narration sometimes focuses too much on the meetings between rivaling factions within the yakuza, the center performance by Sugawara as well as Fukasaku’s direction in the action scenes still make this part an interesting watch for cinephiles. This is especially true when you consider “Proxy War” as a film in a series who becomes darker and more cynical in tone as Japan shows its true degree of corruption and decay in the years the story portrays.

Film Review: Battles Without Honor and Humanity (1973) by Kinji Fukasaku