After experiencing the permeating machismo of the Yakuza Papers Pentalogy, the opportunity to watch a film that actually parodied the yakuza ways, and even more, which had a girl for a protagonist, was more than welcome. “Sailor Suit and Machine Gun” is based on the homonymous, 1978 novel by Jiro Akagawa and stars pop idol Hiroko Yakushimaru, with her presence helping immensely in the appeal the film had in Japan, winning popularity awards for both the title and the protagonist from the Japanese Academy. Furthermore, the distribution income it generated was the biggest in the domestic market for 1982, while the theme song of the film, which was also sung by Yakushimaru, stayed at the 1st place of the weekly Oricon Singles Chart for five consecutive weeks. 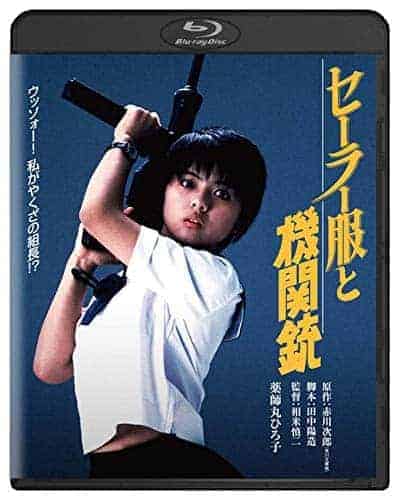 Izumi Hoshi is a normal high school girl, until one day, and after a number of yakuza appear in the school she attends, she realizes that her father was the leader of the Medaka Gumi clan, and that she is the next in line for leadership. The group, however, is anything but fearful, since it comprises of only four men, have very little resources, and still have to face other gangs, with the one whose leader is “Fatso” having another reason to hunt them, since a pack of heroin was lost at the same time her father died, and they blame him for its loss. Izumi reluctantly agrees to be their leader, which leads to a number of tragicomical episodes, while two more individuals, Mayumi, her dad’s ex girlfriend, and Kuroki, another acquaintance of his, seem to be involved in the heroin case.

Shinji Somai takes a rather unique approach to the yakuza genre, by using an adorable high school girl as his protagonist, and by filling the narrative with jokes that linger somewhere between the comedy and the gag. The effeminate homosexual yakuza, the incident when one member of the gang is cold because he got wet while riding on his rundown motorcycle, Izumi’s “roommate” telling her that she has to eat in order for her breasts to grow, and the whole concept of the four-member gang all fall under this approach. On the other hand, the drama is not missing, both for the unfolding of the stories of the main characters and for the presentation of the demise of the yakuza as a whole, whose era of dominance was long since gone.

The occasionally subtle, occasionally not so much humor carries a large part of the narrative; however, this is not where the film’s biggest value lies. Instead, it is the cinematic approach that is the biggest treat here, as demonstrated in a number of wonderfully composed and shot scenes, courtesy of Seizo Sengen’s cinematography and Somai’s direction. The scene where the score of yakuza appear in Hoshi’s school is the first. The second one is the motorcycle ride in the night. The third, the rotating camera scene in the yakuza headquarters, which highlights the city through the windows, in an ingeniously shot sequence. The one where the group sings together and the one in the elevator are also among those who show both Sengen’s ability and Somai’s knack of directing his actors. A few others thrive on context. The fighting scene in the lobby of Hoshi’s house is probably the most dramatic one, along with the sex scene, particularly for the repercussions it has on the girl’s mentality. The scene with the machine gun is considered an iconic one for Japanese cinema, as it also gave the film its title. Lastly, the sequences in Fatso’s headquarters take a rather surrealistic turn, both contextually and visually, while the one where Izumi is being sunk into concrete must have been a shock for the fans of the Hiroko, who were used to another kind of image of her.

All of the above are brought together by Yakushimaru’s magnificent performance, in all the different aspects Somai asked her to perform, from the cute, naive student to the hardcore killer. Rentaro Mikuni as Fatso and Akira Emoto as Kuroki also give memorable performances, although their parts are quite smaller.

Lastly, Akira Suzuki’s editing implements a leisure, mid-tempo pace that allows Somai to explore and present all the elements he wanted, without any kind of rush.

“Sailor Suit and Machine Gun” is a delightful film, filled with very entertaining moments and cinematic artistry, and one of the most iconic productions of Japanese cinema during the 80’s.