“Bullet in the Head” is a 1990 action drama directed by John Woo. Originally planned as a prequel to the successful “A Better Tomorrow” film, the movie became a stand-alone story after Woo’s falling out with his long-time collaborator Tsui Hark (who went on to make his own “A Better Tomorrow III: Love and Death in Saigon”). Does “Bullet in the Head” live up to being “John Woo’s most emotionally powerful film?” Let’s find out together. 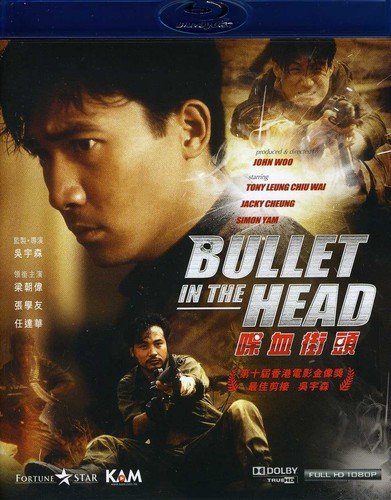 The movie tells the story of three friends: Ben (Tony Leung Chiu-wai), Frank (Jacky Cheung), and Paul (Waise Lee), who regularly brawl with gang members in Hong Kong during the 1960s. Unfortunately, Frank accidentally kills one of the mobsters and the friends decide to flee Hong Kong. They go to Saigon, in order to work as smugglers in the ravaged by war Vietnam. However, things do not go as planned and the protagonists find themselves on the run, together with a hitman Luke (Simon Yam) and a nightclub singer Sally (Yolinda Yam), from the Vietcong soldiers. Eventually, Paul betrays his friends for a box of gold…

“Bullet in the Head” stands out of John Woo’s rich repertoire as not being just a standard bullet-ballet flick. It is not as fast paced as “A Better Tomorrow” or as spectacular as “Hard Boiled”. Nevertheless, the film’s primary asset is a human drama set against the background of a harrowing military conflict. John Woo’s reinvents the “bromance formula” known from his other films by turning it into a war epic similar to Francis Ford Coppola’s “Apocalypse Now”.

That is not to say that the film is simply a melodrama. “Bullet in the Head” is filled with magnificent action set pieces (nightclub shootout) and wonderful David-Lean-like sequences involving large crowds of people (riots scenes evoking Tiananmen Square incident or Vietnam exodus scene). However, the real show stealer is the final battle sequence involving the characters played by Tony Leung and Waise Lee.

With regard to performances, Tony Leung is simply awesome in the leading role, together with his co-stars Jackie Cheung and Waise Lee who give him a run for his money. In addition, Simon Yam does great in the supporting part and is given a surprisingly large amount of screen time. Yolinda Yam’s short but memorable performance also deserves to be noted.

Allegedly, the film’s original runtime was approximately three hours, but John Woo had to cut it down to a little over 2 hours (original theatrical version). Nevertheless, there are still some releases in circulation which contain 10 to 11 minutes of additional footage, including an alternate (very low-key) ending.

“Bullet in the Head” is not a highly recognisable John Woo film, not because it is a bad movie, but due to the fact that the picture was forced to compete with Tsui Hark’s “A Better Tomorrow III” at the box office. As a result, it did not do well financially and John Woo moved on to more conventional actioners like “Once a Thief” and “Hard Boiled”.

If you are interested in John Woo’s filmography and do not know where to start, then give “Bullet in the Head” a chance. If you are a long-time fan, however, please revisit the film. I always discover new things in this movie whenever I come back to it. To me, “Bullet in the Head” is indeed Woo’s masterpiece.