2010’s “Bleak Night” is one of those films that is massively underseen but anybody who’s seen it can’t stop raving about it. Featuring youth actors in a debutant director’s film, the coming-of-age drama won lots of critical praise and awards. More than nine years since its release, director Yoon Sung-hyun is finally here with his second feature film “Time to Hunt”.

Set in the near future in an area filled with poverty. Joon-Seok wants to leave the city and start a new life. For that, he sets up a reckless crime plan. He enlists the help of three friends Ki-Hoon, Jang-Ho and Sang-Soo. Soon, these four men are chased by a mysterious man named Han.

Just like “Bleak Night”, Yoon’s second film also features some of the finest young actors. In fact, both Lee Je-hoon and Park Jung-min return to team up with the director after “Bleak Night”, both of who broke out with the film and have since gone on to become in-demand actors. Joining them are Choi Woo-sik, who’s coming off the back of the biggest hit of his career thus far in “Parasite” and Ahn Jae-hong (“Microhabitat“) while Park Hae-soo (“The Pirates”) plays Han, the man on the four friends’ tails. “Time to Hunt” releases in South Korea in February, 2020. 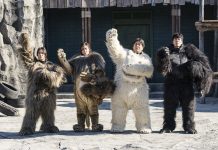