Every story has two sides to it. Injo, the sixteenth King of the Joseon dynasty is generally known to be a weak and indecisive ruler, mostly widely disliked for his surrender of Joseon to the Qing dynasty. His Minister, Choi Myeong-gil is equally regarded as a traitor for spearheading the deal that eventually led to the surrender.

Four years after the vastly popular “Miss Granny”, director Hwang Dong-hyuk attempts to tell the side of Injo and Choi’s story of what truly transpired for the King to take such a step in his latest film “The Fortress”. With its star-studded cast and rich production values, “The Fortress” went on to win Best Film, Best Director, Best Cinematography as well as Best Music at the Korean Critics Choice Awards in 2017. 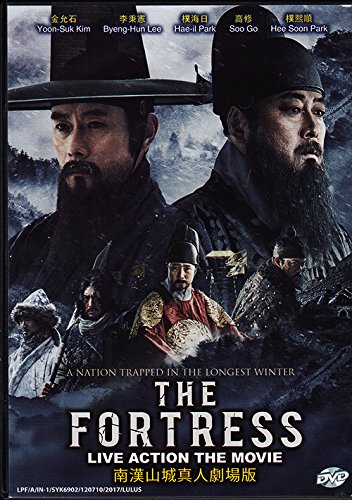 It’s 1636. The Qing have invaded Joseon, driving King Injo and his ministers into the mountains to the fortified city of Namhansanseong. Being surrounded from all sides in piercing cold and cut off from all outside supplies is taking a toll on the weary and hungry soldiers, and Injo must now decide whether to launch an attack at the enemy with what little strength, courage and energy they have or surrender to the enemy, an option that comes with great personal humiliation as well as the handing over the Crown Prince as a hostage to the Qing dynasty. In his counsel are Prime Minister Kim-ryoo as well as Minister of Rites Kim Sang-hun, who insist the King never bends his knee and show the invading barbarians the might of the Joseon, as well as Minister of Interior Choi Myeong-gil, who advocates peace in the country and the well-being of its citizens via the surrender to the Qing. As the King deliberates, Kim Sang-hun grasps at last straws for the victory of the Empire, including but not limited to a plan including Seo Nal-soi, a blacksmith soldier from within the fortress city.

There is a saying which goes “Wars are won in the General’s tent”. “The Fortress”, for the most part, focuses on the discussions in the proverbial General’s tent, in this case Namhansanseong Fortress. The screenplay, by director Hwang Dong-hyuk, gives compelling views for both sides of the argument, and in Kim Sang-hun and Choi Myeong-gil has the right voices to put forth their sides. Though the discussions do tend to get repetitive after a while, making the 139-minute running time somewhat tiresome to sit through, it is when both the characters find themselves advocating the other’s view over the lesser issues that the respect they have for each other comes forth. While the decisions are contemplated on and made by those sat comfortably in the courtroom and their houses, the film suggests, it is ultimately the common man who suffers most, the soldiers fighting a fight they do not want to be involved in, for a King they do not necessarily sympathise with, a stark similarity with the way modern politics is sometimes perceived. The conversations are sprinkled with a dash of spectacularly set bloody battle scenes in each quarter of the film, but they are few and far.

“The Fortress” has a strong trinity of superstars leading the film. Lee Byung-hun, who before “The Fortress” wandered around Sydney in “A Single Rider” and was the saving grace in the unsatisfying “Master”, is fantastic as Choi Myeong-gil and pulls sympathies, something the script clearly aims at. Kim Yoon-seok, in his first period film, is the tender heart of the film, as effective in scenes involving conflict as he is in ones that include his interactions with the granddaughter of a boatsman. Park Hae-il was a risky choice to play the royal Injo, but he really works as the meek, impressionable King. Go Soo as the blacksmith Seo Nal-soi could have been a far more interesting character but the limitations of the script stop him from really showcasing his potential.

The real stars of “The Fortress”, however, are behind the camera. Kim Jee-yong’s cinematography is nothing short of exquisite! The snow-laden fortress walls, the forests and the mountains surrounding the fortress are stunningly captured and really help elicit the dire situation that the habitats of the Fortress, including the King and his courtiers, found themselves in. The interiors of the court are similarly lensed. It is no secret that Ryuichi Sakamoto is a master of his craft and his rousing background score truly elevates the film to another level, complementing the cinematography perfectly. The awards both the men received for their work on the film are very well deserved.

“The Fortress” did very well in its opening weekend on the domestic box office and indeed during its theatrical run in its home country. It is certainly a film that would work most for a Korean audience, or for one who’s interested in world history. For those that don’t fit in either of those brackets, it is still an interesting film with some gorgeous film with a stirring background score whose heart-wrenching final act would have been a lot better served if it had come sooner with a tighter edit.