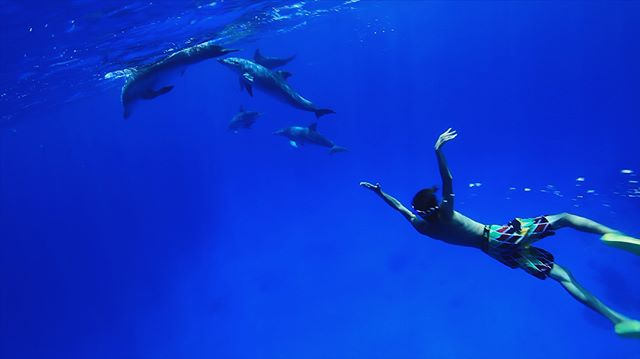 If you were wondering what Toyoda did between 2014 and “Crows Explode” and 2018, this documentary provides the perfect answer: He spent those years on the Ogasawara Islands, a UNESCO World Heritage Site located 1,000 km south of the main Japanese archipelago, with “Tarzan of the Sea” Noritsugu Miyagawa. The 65-year-old is quite famous, as he was the man who created the world’s first swimming-with-dolphins tour, but in this particular film, he is the host of a number of people Toyoda invited to spent time on the island, namely didgeridoo instrumentalist Goma, actors Yosuke Kubozuka and Kiyohiko Shibukawa, drummer Tatsuya Nakamura, and guitarist Kazuhide Yamaji.

Toyoda directs a naturalistic documentary that seems to aim at highlighting both the beauties of the setting and the benefits of spending time in such a unique, but mostly secluded place. This last aspect is mostly represented by the segment dealing with Goma, which is the most lengthy one, as we watch the artist who suffered a head trauma years ago that left him without a capacity to have memories (kind of) creating music in an effort to communicate with the environment, and particularly whales, and to find solace and healing from his rather traumatic mental state. This segment, through both image and Goma’s music becomes almost psychedelic after a fashion, with its aesthetics being quite close to those of music videos, a tactic that actually extends to the whole documentary. The performances by both Tatsuya Nakamura and Kazuhide Yamaji also point towards this direction, with the setting of the cliff overwatching the sea providing an excellent image for the sounds heard by the artists’ solos.

The parts about the actors are more generic, although Shibukawa steals the show once more as he tries to talk to the sea birds on the trip to the islands (that takes about 24 hours btw), at least when he isn’t playing his sax.

Lastly, the documentary presents Miyagawa’s life story through various recordings of him talking and photos and videos from his archive, in a series of rather personal interviews that also focus much on his father and his influence.

Toyoda’s camera has captured excellently the natural setting, presenting a number of images of extreme beauty, with the one where people are jumping from cruising boats into the sea being one of the most memorable. In that fashion, the documentary also functions as a tour guide and an invitation to the area, in an effort that is easy to say that succeeds to the fullest. The only flaw I found is that at 120 minutes (IMDB has it at 166, so maybe there is another version also) it somewhat overextends its welcome, particularly for those who are not used in watching observational documentaries, in a style that is much similar to that of Kazuhiro Soda.

For those who manage to overcome this “limitation” though, a rather impressive audiovisual experience will be there waiting for them, while at the end of the screening, they will definitely seek out ways to travel to the islands. At least I did.

Trailer for New Japanese Drama A Life Turned Upside Down: My Dad’s an Alcoholic

Film Review: A Life Turned Upside Down: My Dad’s an Alcoholic (2019) by Kenji Katagari