Before inventing the “Heroic Bloodshed” genre in the 80’s, with films that shaped action cinema for decades, like “A Better Tomorrow” and “The Killer”, John Woo was directing martial-arts films for the two biggest studios in Hong Kong, Shaw Brothers and Golden Harvest, under the guidance of the great Chang Cheh. Although traditionally shot, “The Hand of Death” manages to highlight the fact that Woo was destined for greater things, particularly due to the way the action was shot. Furthermore, the film features performances from Sammo Hung (who was also the stunt coordinator), Jackie Chan and Yuen Biao on a minor role. Let us take things from the beginning, though. 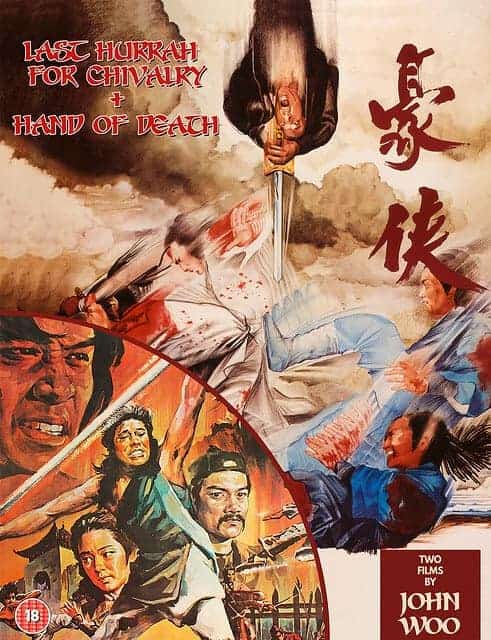 The story revolves around Yun Fei, the best student of a Shaolin master, who is tasked with taking down Shih Shao-Feng, a Manchurian warlord who is set on eradicating the Shaolin from China. Before dealing with his arch enemy however, Yun Fei has to face his 8 bodyguards and a rather cunning subordinate, Tu Ching. After a sound initial defeat, Yun Fei asks the help of a local blacksmith, Tan Feng and a lonely swordsman, who has not drawn his sword for a year after accidentally killing the woman he loved.

The film follows the general rules of the then category, implementing a frantic pace with the help of the almost abrupt editing of Peter Cheung and Tung Chun Yuan, while the action is truly relentless. Either in extreme training sessions, or in brutal hand-to-hand or with weapons fights, the action begins from the first frame and does not stop until the end, with just a few brief moments of calm that introduce that rather basic story and the characters. In that fashion, Sammo Hung has done an excellent job in the choreographies, taking full advantage of his, Jackie Chan and Yuen Biao’s talents, who are the ones that act as stunt doubles for the two protagonists, Doran Tan as Yun Fei and James Tien as Shih Shao-Feng. The two actors are quite good in their respective roles, the first as the archetype of the hero and the second as of that of the sadistic arch villain. Jackie Chan is surprisingly good as Tan Feng, in a role that probably has the most depth in the story.

The aspect that truly makes the film shine, however, is the cinematography, as implemented by Woo’s artistic visage and Liang Yung-Chi’s camera, with their cooperation ending up in a number of excellent frames, which also highlight Woo’s ability in composition and of directing many actors at the same time. The scene where Yun Fei tastes defeat is a great sample of the fact, although the visual prowess reaches even more higher apogees during the rather lengthy and intense final fight (sequence if you prefer) when one can marvel at the beauty of the setting as much as on the action itself. This last part also entails much drama, in another element Woo would later introduce in his movies.

“Hand of Death” is a great sample of the traditional HK martial arts film, but manages to stand out through the directorial abilities of John Woo, while providing a great testament to the new elements he would later bring in action cinema, internationally.