Diving into Miike Takashi’s fantasy world is mostly great fun, and in the case of “The Great Yōkai War”, you get catapulted straight back to the 1980-s, a decade marked by a handful of pictures that tackled kids’ imagination. Spielberg’s “E.T” was sweet and Hollywood-cheesy, Richard Donner’s “The Goonies” was the film even our parents approved of, and Jim Henson’s “Labyrinth” was the one film critics wanted us to forget about, which we never did. But we loved them all. 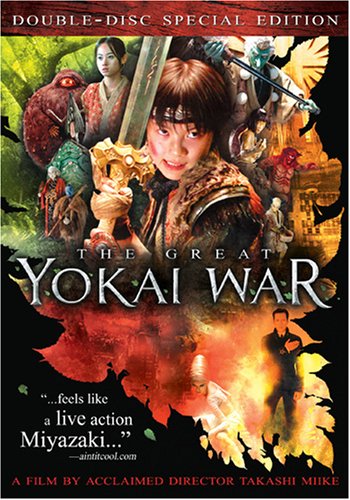 The reason for mentioning those particular film classics is that “The Great Yōkai War” has the retro feel both in terms of the costume design and make-up, and by its extensive use of the stop-motion animation. It also doesn’t care being labelled childish instead of being just a film for children, leaning completely on the fantastic world of the Japanese supernatural beings known as Yōkai that wouldn’t want to be insulted by being taken seriously. In fact, all of them are summoned in “The Great Yōkai War” where thousands and thousands of bonkers-looking creatures join in a wild parade (which turns out to be something else) that establishes the order again through its own cheerful chaos.

Still applying the visual aesthetics of the old- but embracing the technology of the new century, Takashi builds his film based on Hiroshi Aramata’s popular book “Teito Monogatari”, that he adapted to script together with Mitsuhiko Sawamura and Takehiko Itakura in 2005. The film was also influenced by Mizuki Shigeru’s “Kitarō of the Graveyard” manga series, and it’s quoted as an adaptation of Kuroda Yoshiyuki’s 1968 classic “Ghosts on Parade”, which I beg to differ. Since both films turn to the same main source, it is understandable to find the overlapping in terms of chosen characters (the long-necked Rokurokubi, the one-legged blacksmith Kasa-obake, the azuki-beans washer Azukiarai, spirit Kawataro or the River princess Kawahime), and that’s when similarities stop. The narrative of Miike Takashi’s “The Great Yōkai War” goes its autonomous way.

Its titular character is a 11-year-old boy Tadashi (Ryunosuke Kamiki) who moves to a small village after his parents’ divorce to live with his mother Youko (Kaho Minami) and his grandfather Shuntaro (Bunta Sugawara) who suffers from dementia. Miike Takashi shows a lot of empathy for a child that’s longing after his father and elder sister, and he compensates for his hurt by turning him into the next guardian of peace, and the friend of justice – “Kirin Rider”.

Tadashi doesn’t suspect that the title he was granted at a village festival is real until he goes to the Goblin Mountain to search for his grandfather who allegedly went there and disappeared. He is also not aware of the significance of the Azuki-beans, rice and towel he was given along with the “Kirin Rider”role. When he gets approached by the sea spirit Shōjō (Masaomi Kondō), he is forced to overcome his fears to take over the Goblin Sward from Daitengu to fight the evil. But what he has to deal with are two villains with scary superpowers: a mighty demon Yasunori Kato (Etsushi Toyokawa), a former human who wants to take the revenge on the whole humankind and Agi (Chiaki Kuriyama) who betrays her own kind for the love of Kato.

There are lots of awfully (pun intended) cute Yōkais to lose our minds over in “The Great Yōkai War”. If a small rabbit-like creature that moves like a battery-powered toy and that bleeds jam-like substance doesn’t steal your heart, then even a basket of cute kittens won’t. That particular little fellow – Sunekosuri, plays one of the key roles in the plot of the film. But all of them can also tur into beast from hell; Kato is turning Yōkai into monsters by pushing them into a purple hell called Yomotsumono, which is none than the accumulated wrath of resentful things humanity has used and thrown away. The beastly things are sent across Japan to cause mayhem, until the Kiri Rider takes over.

“The Great Yōkai War” is a film you wish you’d seen as a kid along with all the occidental classics you grew up with.