After several years in television and the release of three romantic comedies including “Seven Years Itch” (1987), Johnnie To comes up with his first Action Movie “The Big Heat”. The extremely rare movie, famously known for its DVD release that falls short in terms of synchronization and subtitling, holds the blueprint of many later films of the director. 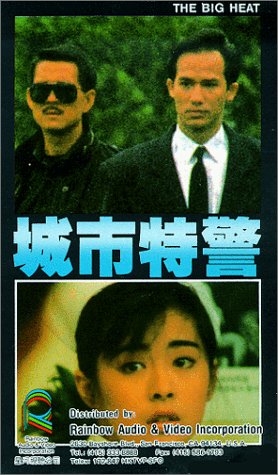 “The Big Heat” centers around the policemen John, played by Waise Lee also known as the bad guy from “A Better Tomorrow” (1986) and “Bullet in the Head” (1990), who has to solve the murder of his former partner before he can retire. Like many other of To’s heroes (“Running out of Time” 1999, “Mad Detective” 2007) John has a disability. Due to a nerve damage, his hand is temporarily paralyzed.

Speaking of Johnnie To, one cannot dismiss the aspect of the auteur. Johnnie To is a prime example of a director that changed the nature of a genre more than the other way around. Instead of following the beaten paths of the action genre, he made his own rules and affected the whole industry. Different from his comedic works, the action film genre gave To space to create interesting narratives, representing not only cinematic but also his political and social concerns. His so-called “urban Westerns” can be categorized in Gangster Triad and Cops/Robber/Detective movies. The gun violence, as the most obvious correlation to the Hollywood Westerns, is placed into a hardboiled urban setting mixed with mythological themes and a crime driven storyline. Being the first entry to this newborn genre, “The Big Heat”, shows the first glimpse of Johnnie To’s filmmaking practice in the field of art action film that is atypical from other movies.

Broken bones, crippled bodies and cut off heads. The quality of violence that inhabits the screen is by far the most psychotic and brutal one in To’s artwork. “The Big Heat” shows the typical signature of similar Cinema City Productions such as “School on Fire” (1988) but crosses genre borders by mixing the story with slasher elements. The film establishes this feeling in the very first scene, in which the hand of John gets speared by a drilling machine. A nightmarish scene straight out of Wes Craven’s “A Nightmare on Elm Street” (1984) from which the main character awakes and that also includes a clever symbolic narrative, which hints to his disabled hand.

The Dirty Harry like main character Wong rushes through the scenes. Johnnie To uses speed as a fundamental concept in this action flick and sets up a high pace that never really stops throughout the movie. Given the fact mentioned in the introduction, that the audio, as well as the subtitles are far off track during most of the time, the fast pace makes it really difficult to follow the plot. The gore and the speed create a somewhat surrealistic atmosphere in contrast to the more realistic violence that can be seen in To’s later film, except “Running on Karma” (2003) and the “Election”-Series (2005/2006).

Gory Elements are partly owed to Tsui Hark’s involved as the producer of “The Big Heat”. The Hong Kong New Wave director (“Peking Opera Blues” 1986) had a big impact on the production. The crew further consists of Gordan Chan as a screenwriter, who later directed Jet Li’s “Fist of Legend” (1994), and the cinematographer of John Woo’s “The Killer” (1989) Horac Wong. The typical slow-motion shootouts are done by editor David Wu (“Hard Boiled” 1992), who isn’t showing off his best skills in this movie. The extremely high pace is presented by a clumsy editing. The high prolific crew personifies the Golden Era of Hong Kong Cinema stretching out from the mid-80s to the beginning 90s.

On the actor’s side there is the well-known Waise Lee as John and veteran support actor Paul Chu Kong as the main villain who later appeared in many films of John Woo (“Once a Thief” 1991). Besides, there are also small cameos by director Kirk Wong (“Crime Story” 1993) and producer Tsui Hark himself. The acting is not over the top, but also not very convincing. Chug Kong’s character resembles a corrupt businessman, who tries to bribe the police. He personifies the political commentary of the movie by anticipating the corrupt situation that followed in the years of Hong Kong’s Independence in 1997.

The new style that To starts to establish includes the introduction of the hospital as a major setting, his preoccupation with pathology and the hero that is struck down by illness. In the form of flashbacks, the hero is constantly haunted by the past and is disempowered. Compared to To’s directorial debut, “The Enigmatic Case” (1980), “The Big Heat” is much darker because of the nightmarish scenes that add up to the character’s feeling of inadequacy. Furthermore, the main character’s relationship with his colleagues, villain, and wife is deepened in To’s later works. For example, male-bonding teamwork in “Lifeline” (1997) and “PTU” (2003); the hero-villain construct in “Running Out of Time” (1999), and the male-female relationship is laid out in “Loving You” (1995) and “A Hero Never Dies” (1998).

“The Big Heat” bridges the generic Hong Kong Cinema of the 80s with To’s personal approach to the action genre that he continues to follow in the 90s. The great cast and crew can’t fully deliver, so that the film feels kinda odd. “The Big Heat” has good moments and a great soundtrack by Lo Ta-Yu (“Vengeance” 2009), but the overall narrative cannot build up a connection between characters and audience. In the end, we don’t even care about the hero anymore. As a result, we get to see a solid action movie with promising elements on the visceral level and outrageous violence that’s still unparalleled to present day. For everything else, To needed more than a decade from there to fully bloom as superb director.

Film Review: Under the Shadow (2016) by Babak Anvari